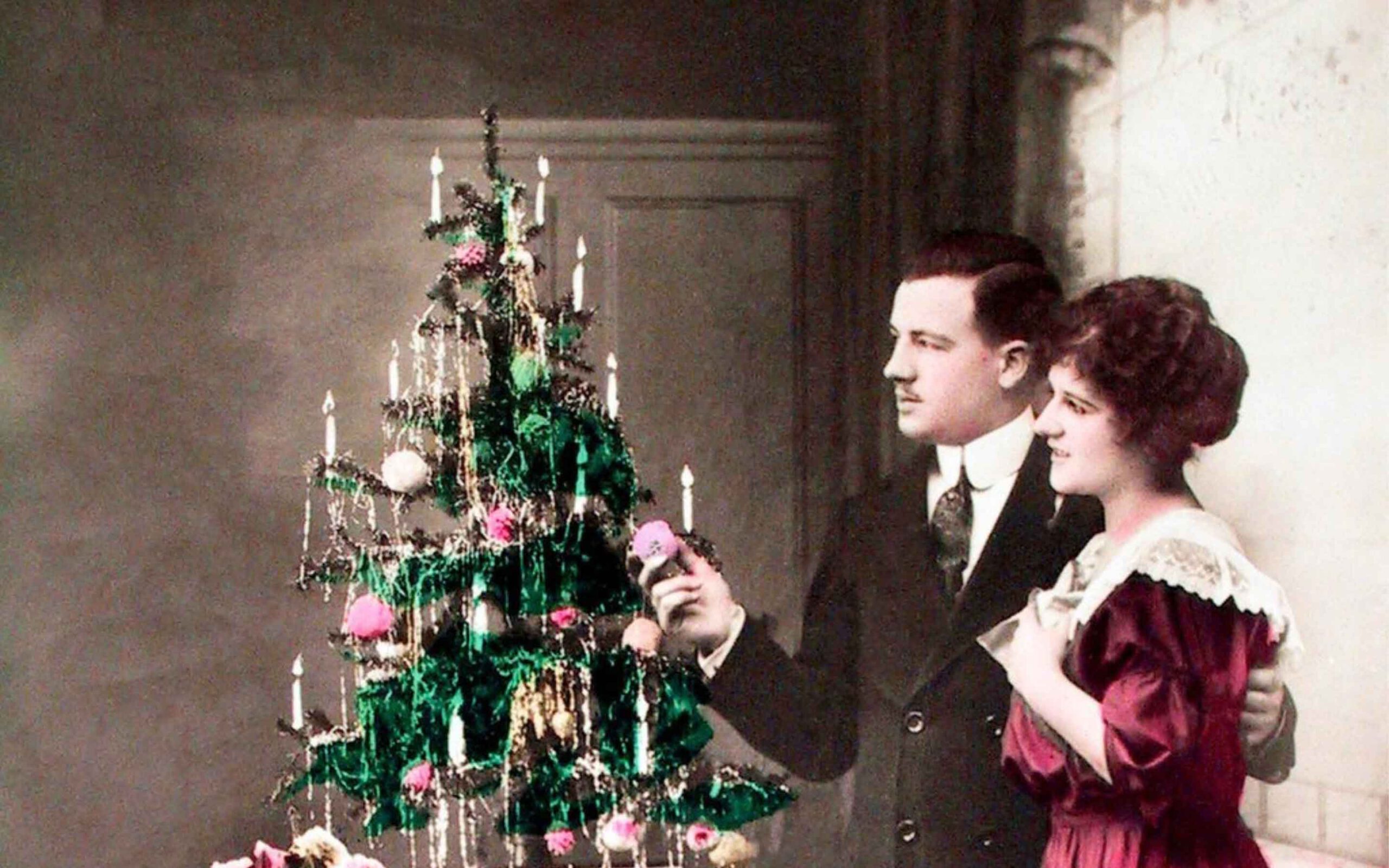 celebration of the Christmas tree in all its festive glory. Get a glimpse into its intriguing background and the lore that accompanies it.

Perhaps second only to Santa Claus, Christmas trees are the most indelible secular symbol of the holiday. While the elaborate—and often enormous—trees of today might imply that yuletide greenery is just another symptom of the commercialization of the holiday, the truth is that Christmas trees can trace their roots back to ancient times.

Modern Christmas trees are associated with December 25th and all its celebrations—religious or otherwise—but the presence of evergreen plants in winter decor has a more pagan origin.

In ancient Egypt, for example, worshipers of the sun god Ra placed green palm fronds in their homes after the winter solstice to celebrate the return of sunnier days after the long darkness of fall. 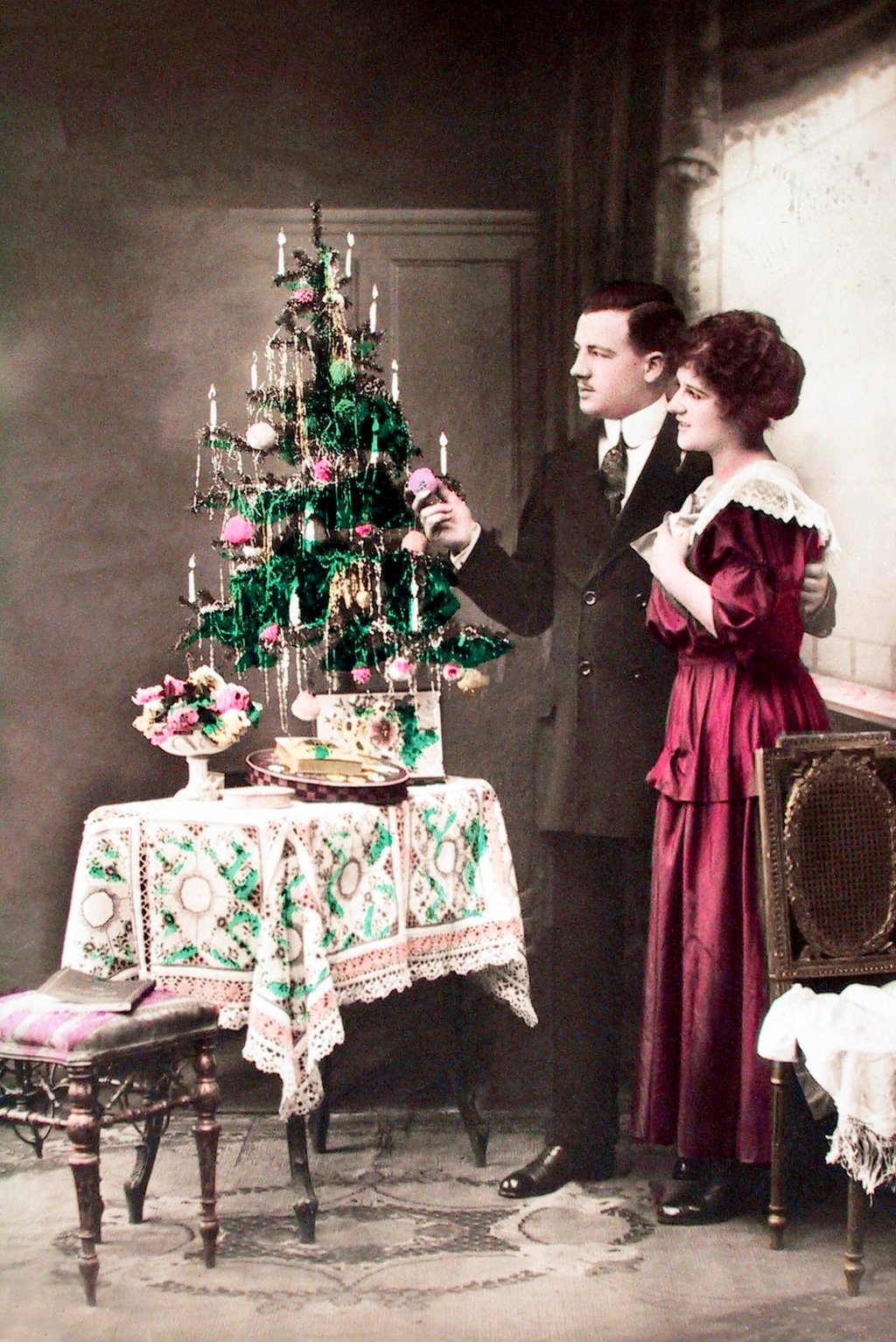 The Romans also held a December festival near the date of the solstice: Saturnalia, dedicated to the god Saturn. One of the celebration’s many traditions included decorating the home with evergreen boughs, which symbolized eternal life and the hope for a sunnier, bountiful new year. 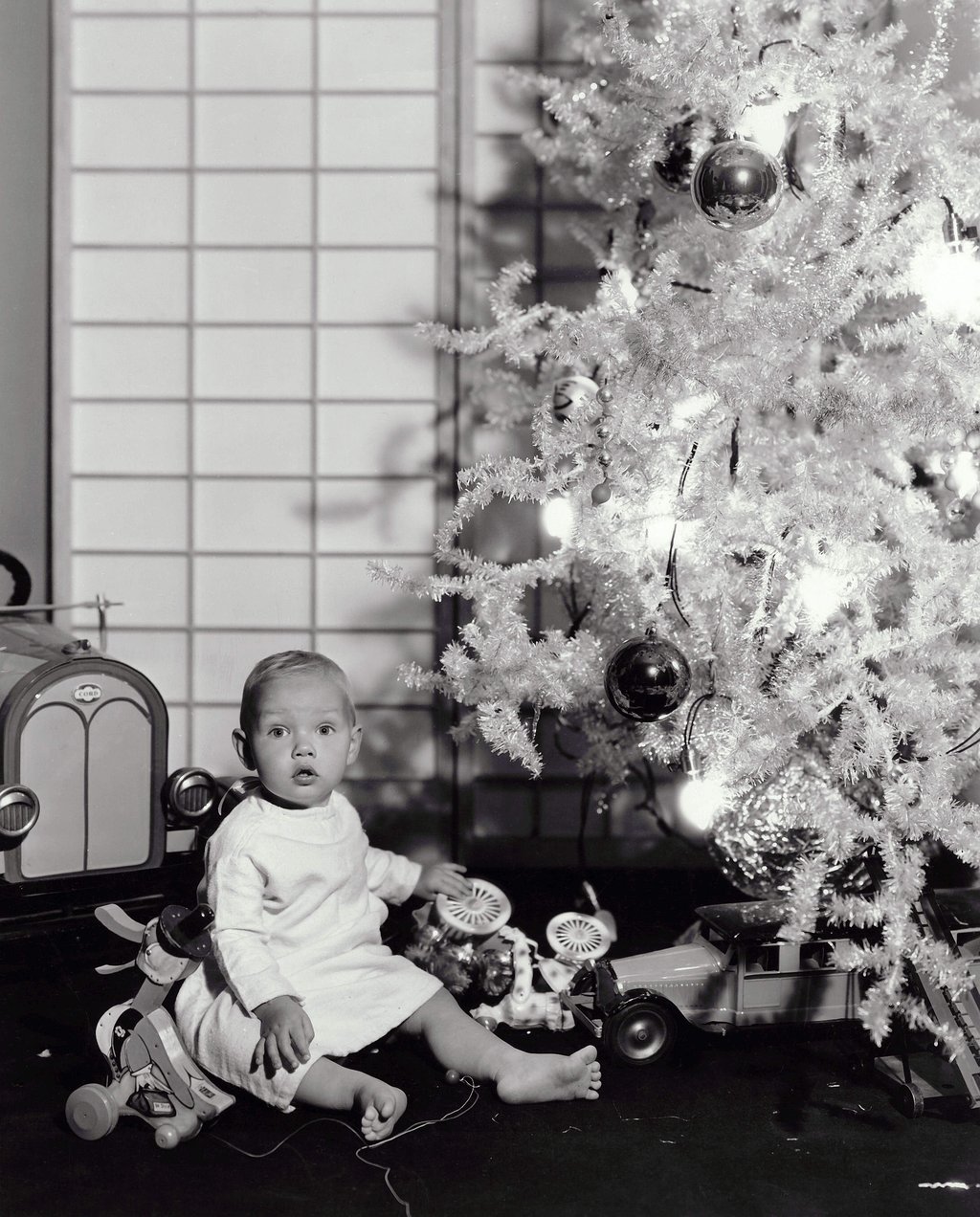 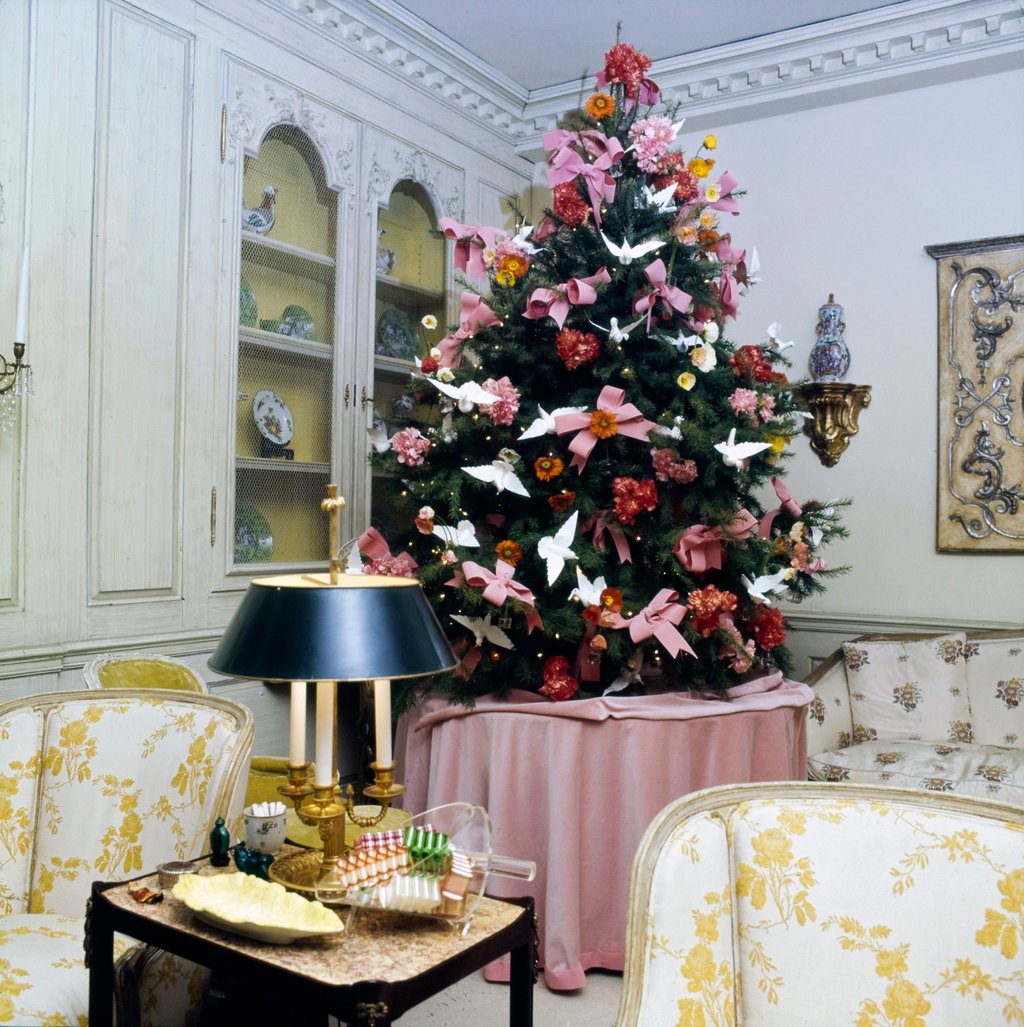 A pink-accented Christmas tree featured in the December 1971 edition of House and Garden (right). Images via Kobal/Shutterstock and Ernst Beadle/Condé Nast/Shutterstock.

In Northern Europe, Germanic tribes celebrated Yule in the month of December, starting several traditions that trickled down in some form or another: the Yule log, caroling, and evergreen decor. 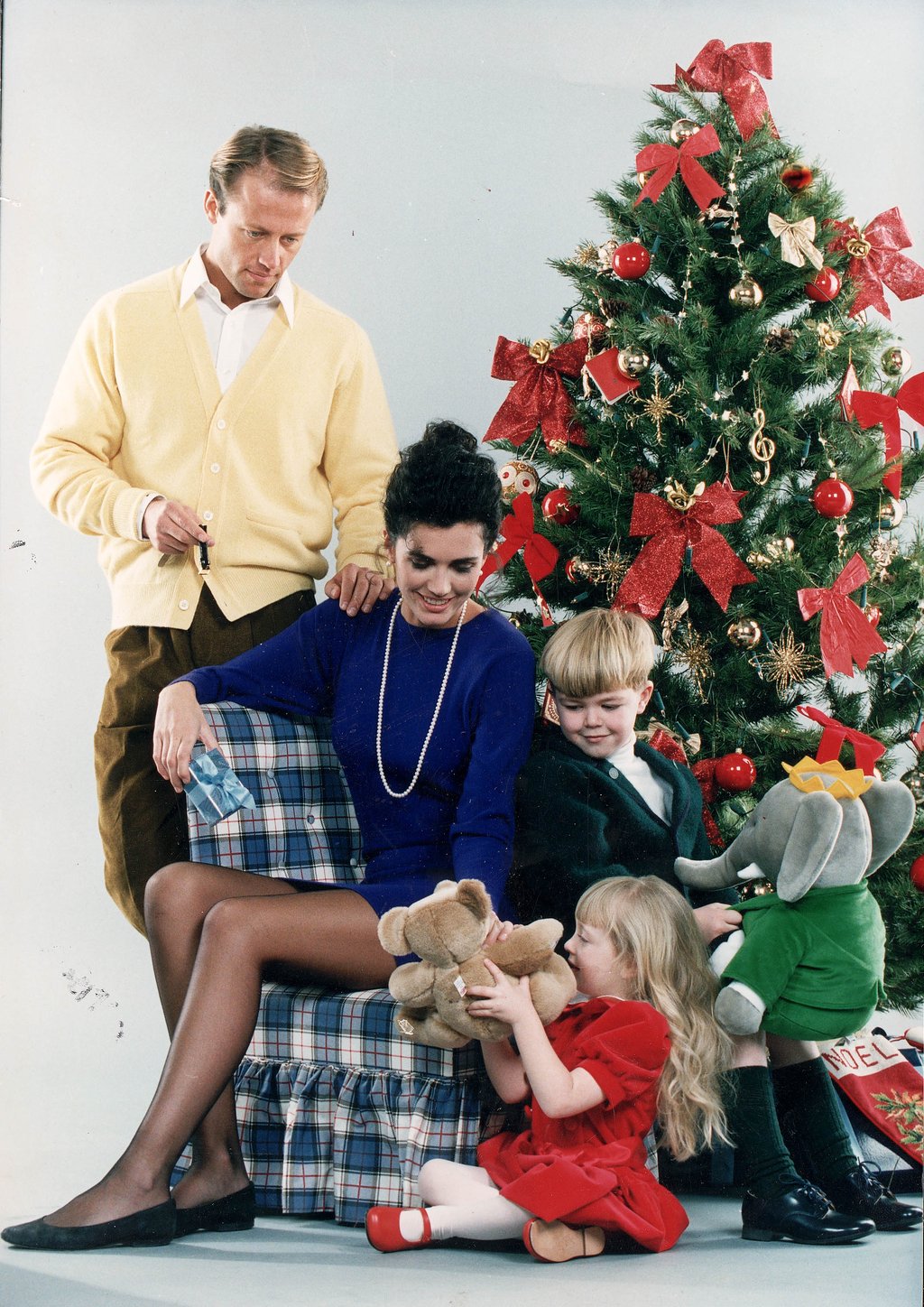 The Christmas tree as we know it, however, only dates back to the 16th century or so. Martin Luther is often credited as one of the first people to decorate an evergreen with lit candles after he noticed how pretty the stars looked twinkling through the branches.

That story may be apocryphal, but it’s true that Germans were the earliest European adopters of the Tannenbaum—they did, after all, write the song about it.

The Christmas tree arrived in America in the 1800s thanks to German immigrants who brought their holiday traditions with them. These early trees were typically decorated with edible snacks like marzipan cookies, nuts, candy, and fruit.

While these trees sound delicious, other Americans—some descendants of the religious Puritans—were initially skeptical of the tradition, deciding it was a bit too pagan for their taste. 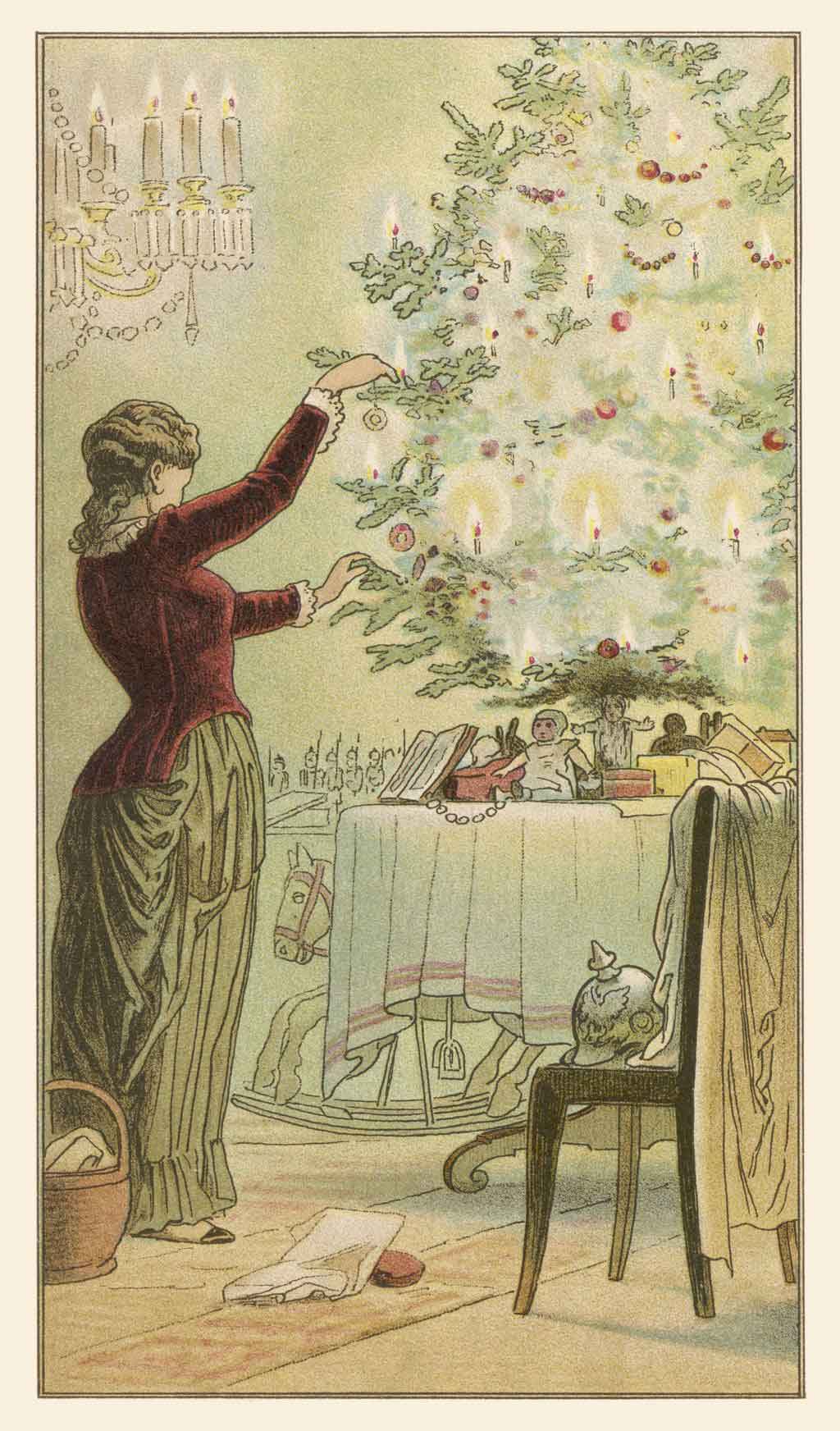 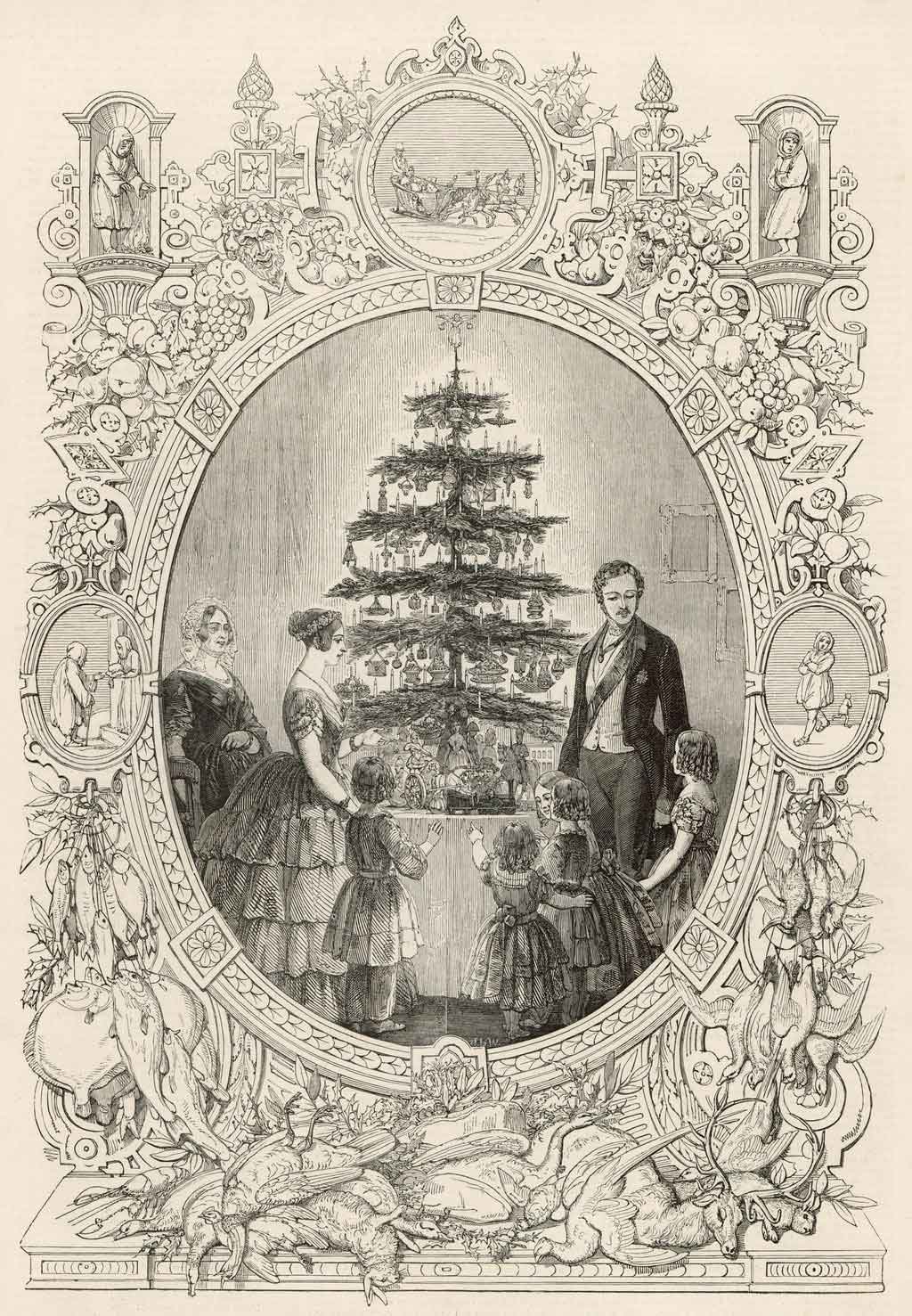 Enter Queen Victoria. Like many modern Americans, mid-19th century citizens were absolutely obsessed with the royals, despite the fact that the country fought in a war for independence from Britain less than seventy-five years earlier.

Victoria was especially popular, with soaps, hats, hairbrushes, and other souvenirs popping up all over the county to commemorate her 1838 coronation. So, when she and Prince Albert got a Christmas tree for Windsor Castle in 1848, everybody had to have one. 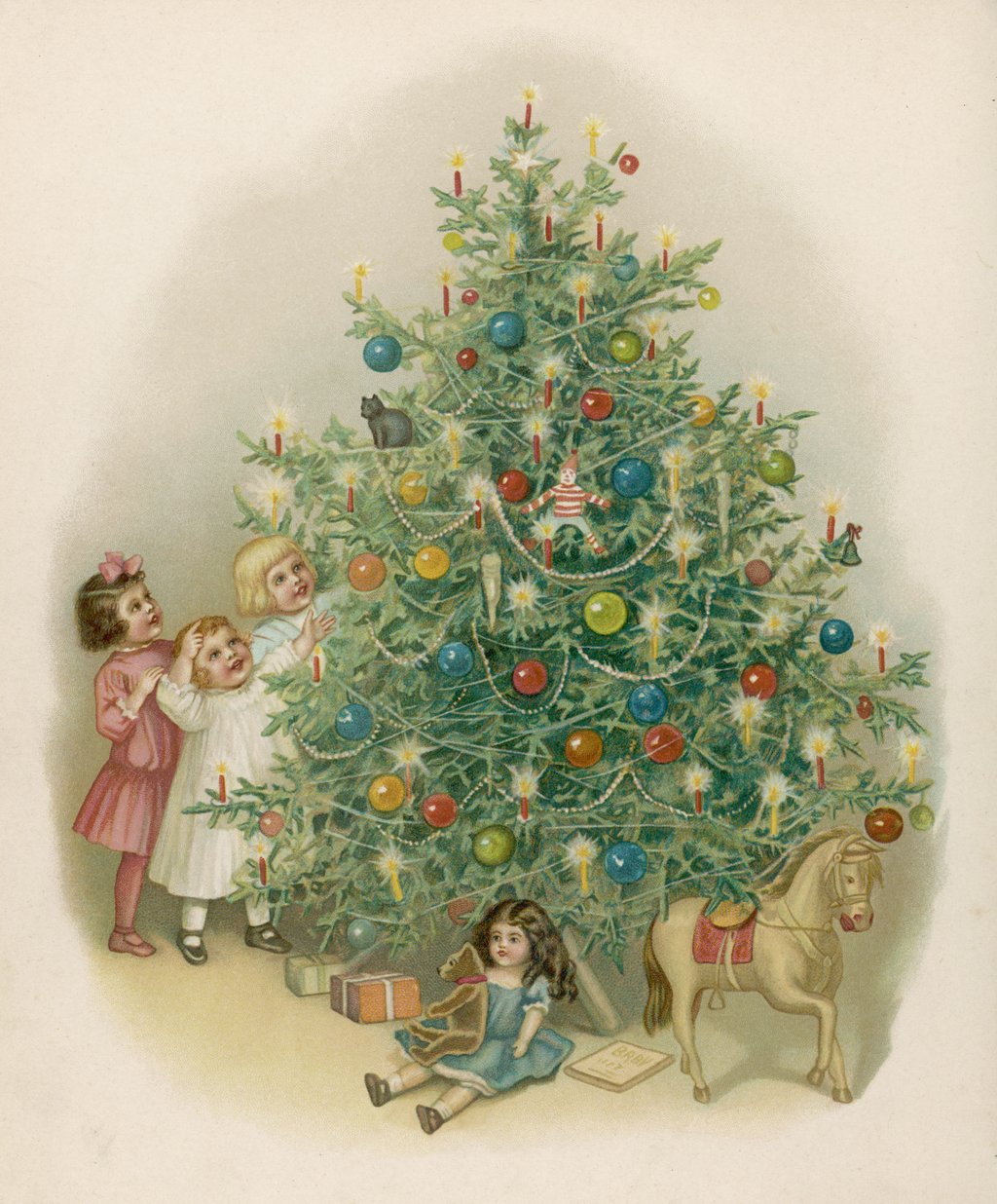 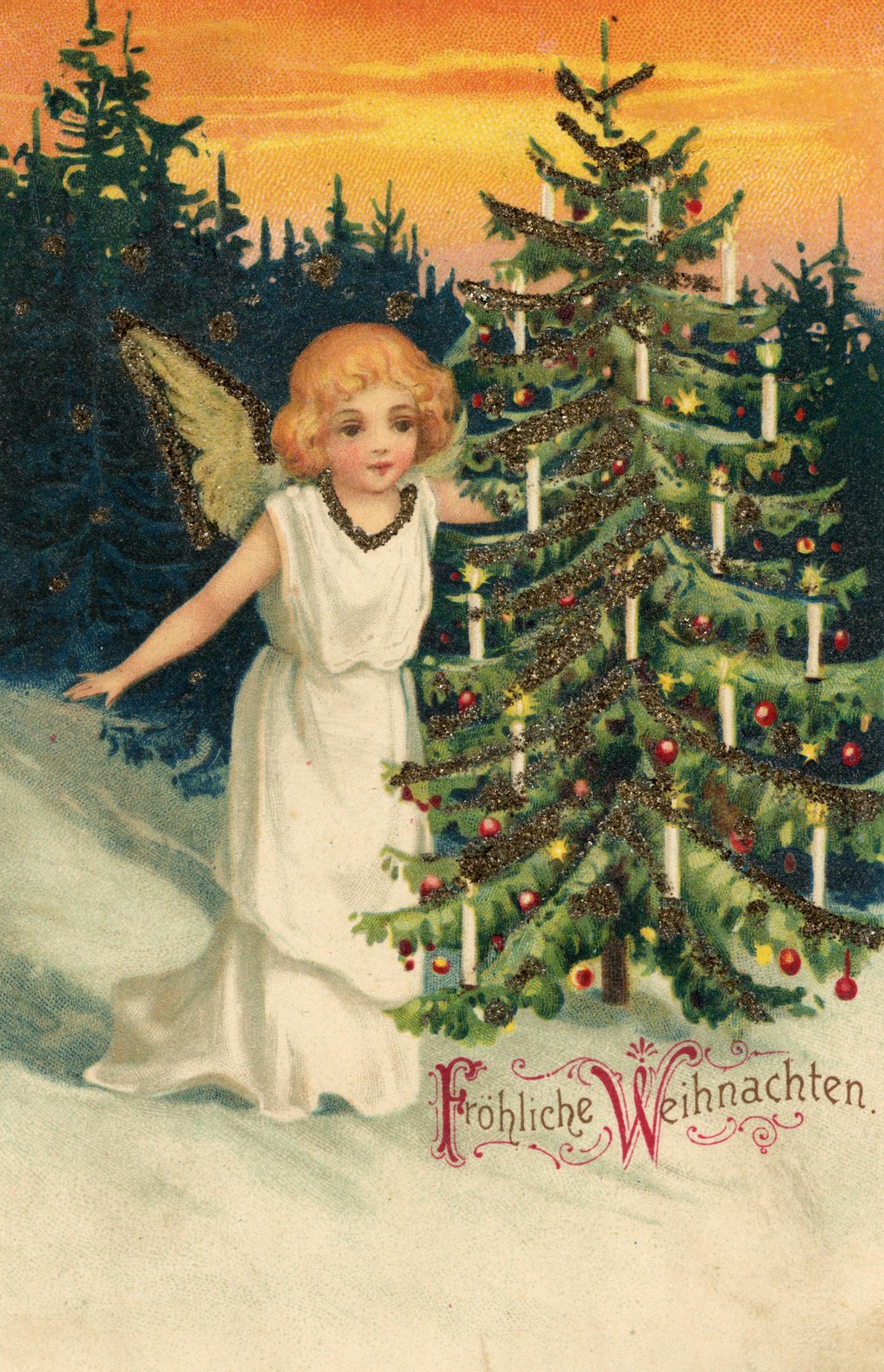 Victorian trees, like Martin Luther’s legendary tannenbaum of yore, were mostly decorated with lit candles, with the addition of homemade ornaments and strings of garland and ribbon.

The candles, as you might expect, were something of a fire hazard, and there were early reports of skirts set aflame by aggressively lit Christmas trees. (The spread of electricity later in the century helped mitigate this problem, as real candles were replaced with faux ones.)

By the early 1900s, Christmas trees had fully taken off in American homes, but for the most part, they were decorated in much the same way they were during Victoria’s reigncandles or string lights, with homemade ornaments and garlands.

It wasn’t until Christmas trees became commercialize that ornaments started popping up. Image via Historia/Shutterstock.

As department stores started getting in on the Christmas tree game, store-bought ornaments—as seen in elaborate window displays at Macy’s, Marshall Field’s, and others—became more common.

After the Great Depression, tree decor began to take on a lot more sparkle. Silver and gold tinsel added some glamour, while silken ball ornaments and glittery stars and angels made everything look more deluxe.

In 1931, the first giant tree appeared in the plaza at Rockefeller Center, upping the ante for amateur decorators at home. Hollywood and Washington, D.C. also showed off their Christmas spirit with contemporary movie stars and presidents posing with dressed-up evergreens overflowing with sparkle and shine. 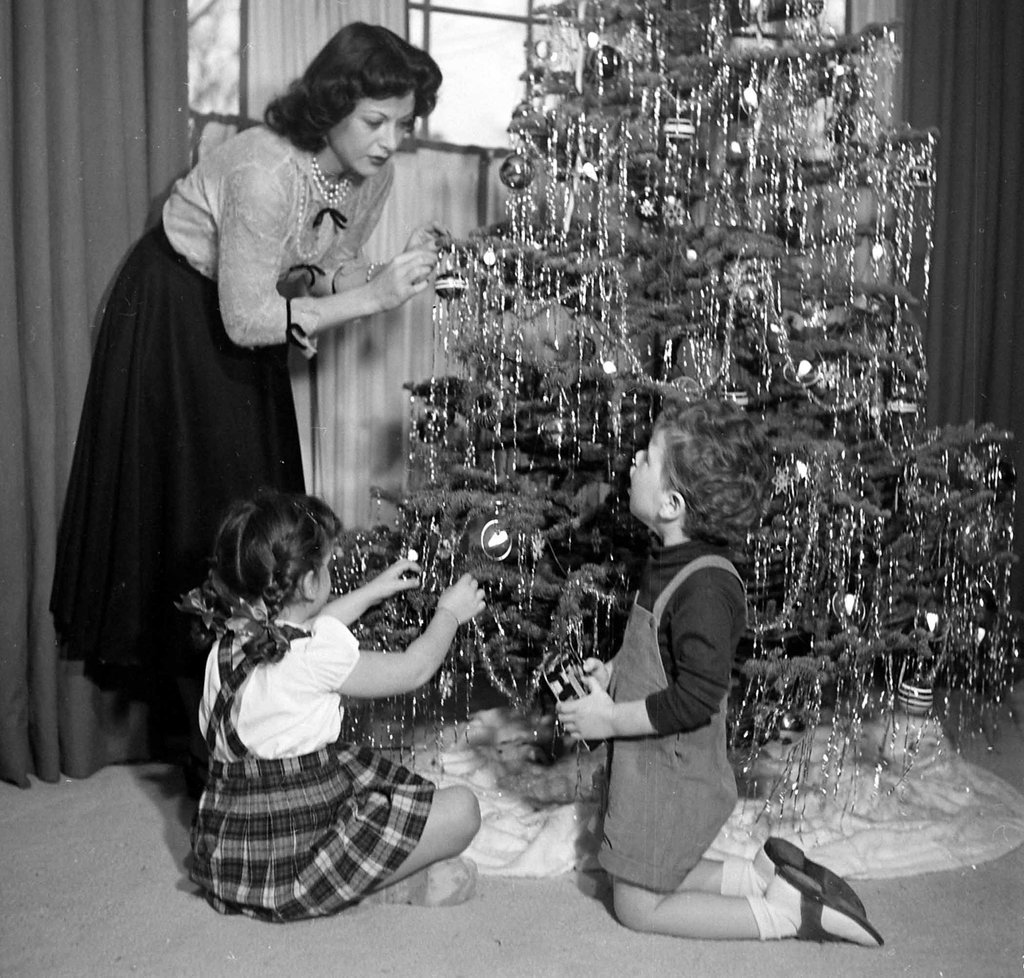 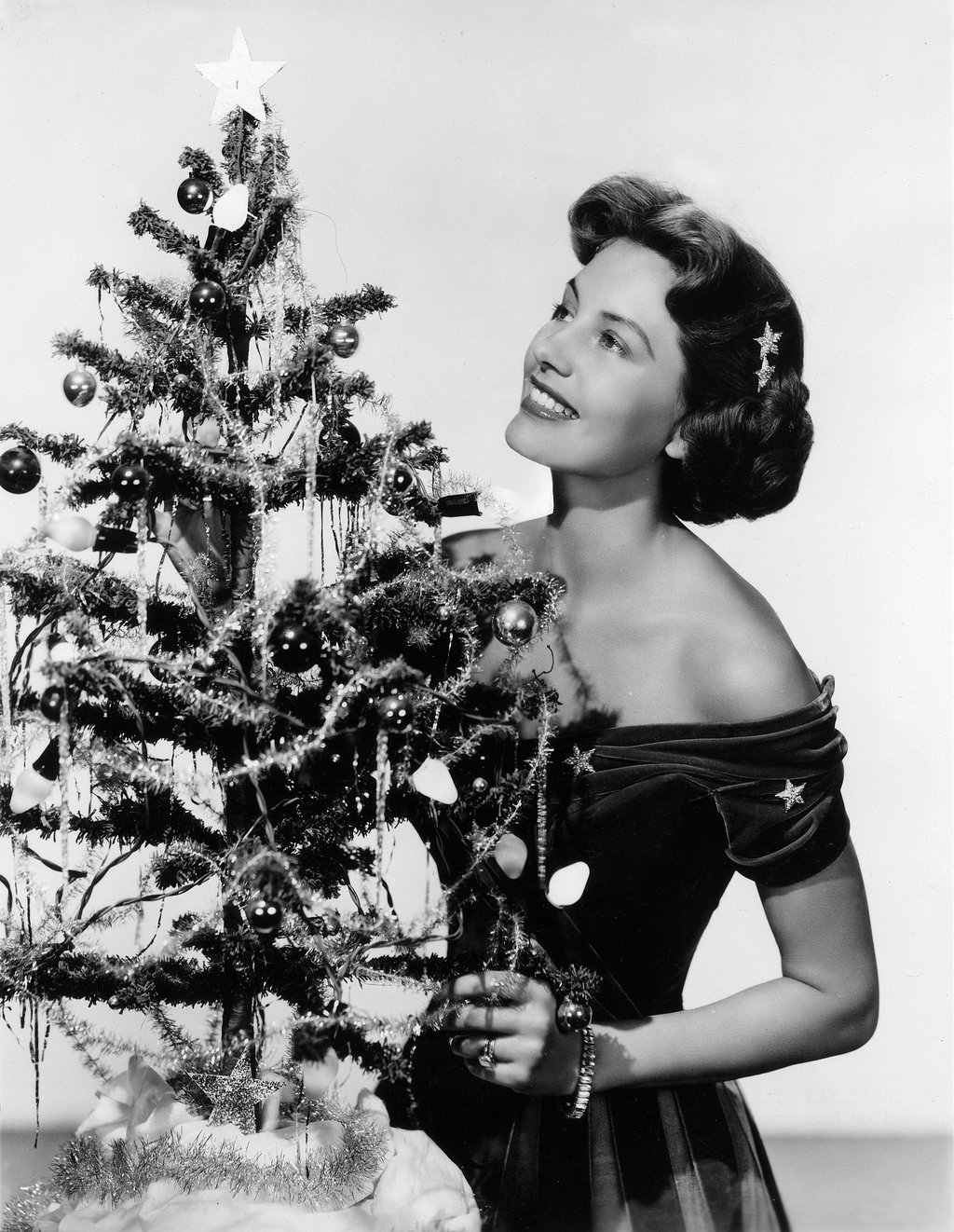 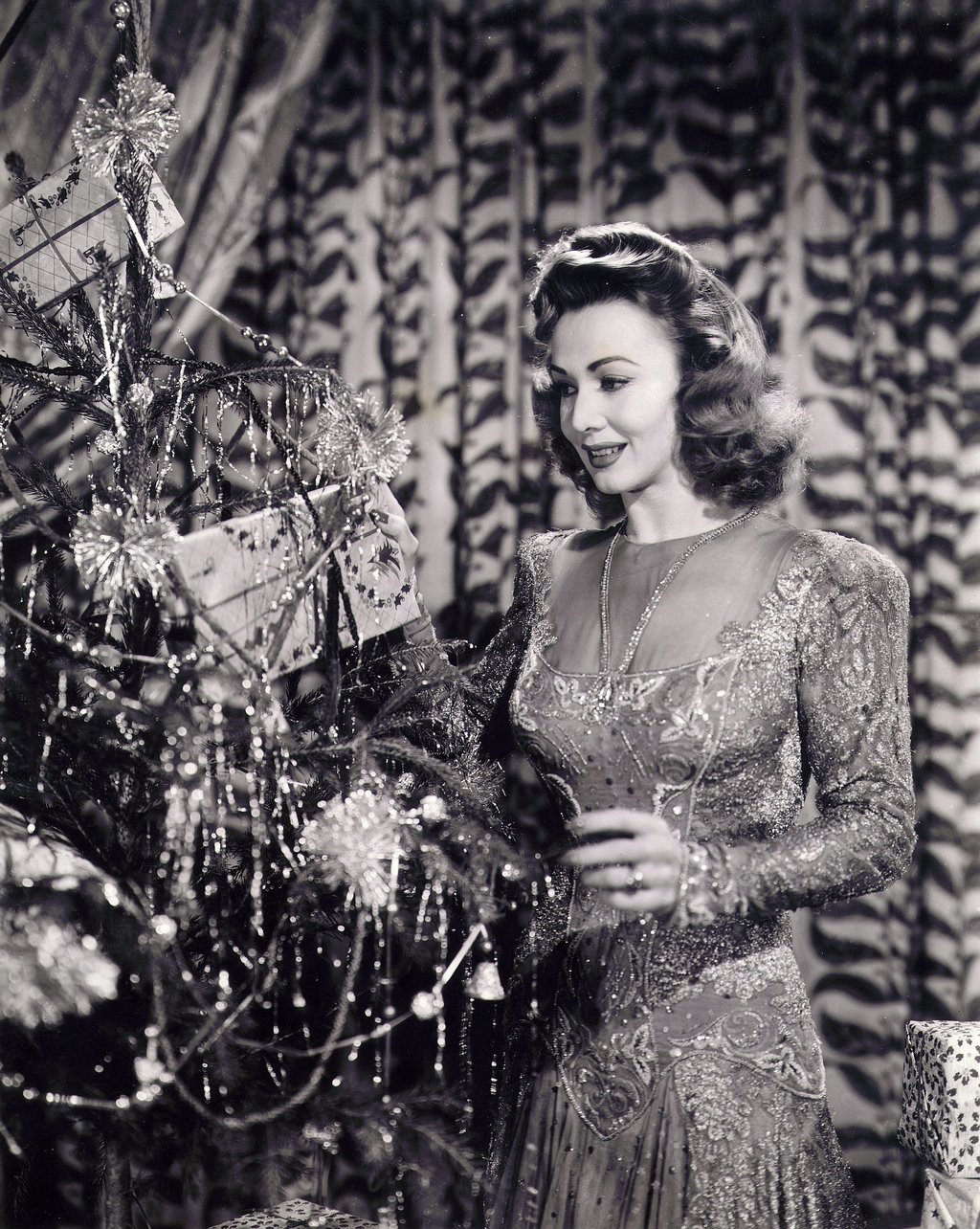 As ornament manufacturing increased (alongside a general appreciation for consumerism), Christmas trees got busier, with more baubles, more garlands, and more accoutrements, like toy trains circling their bases. 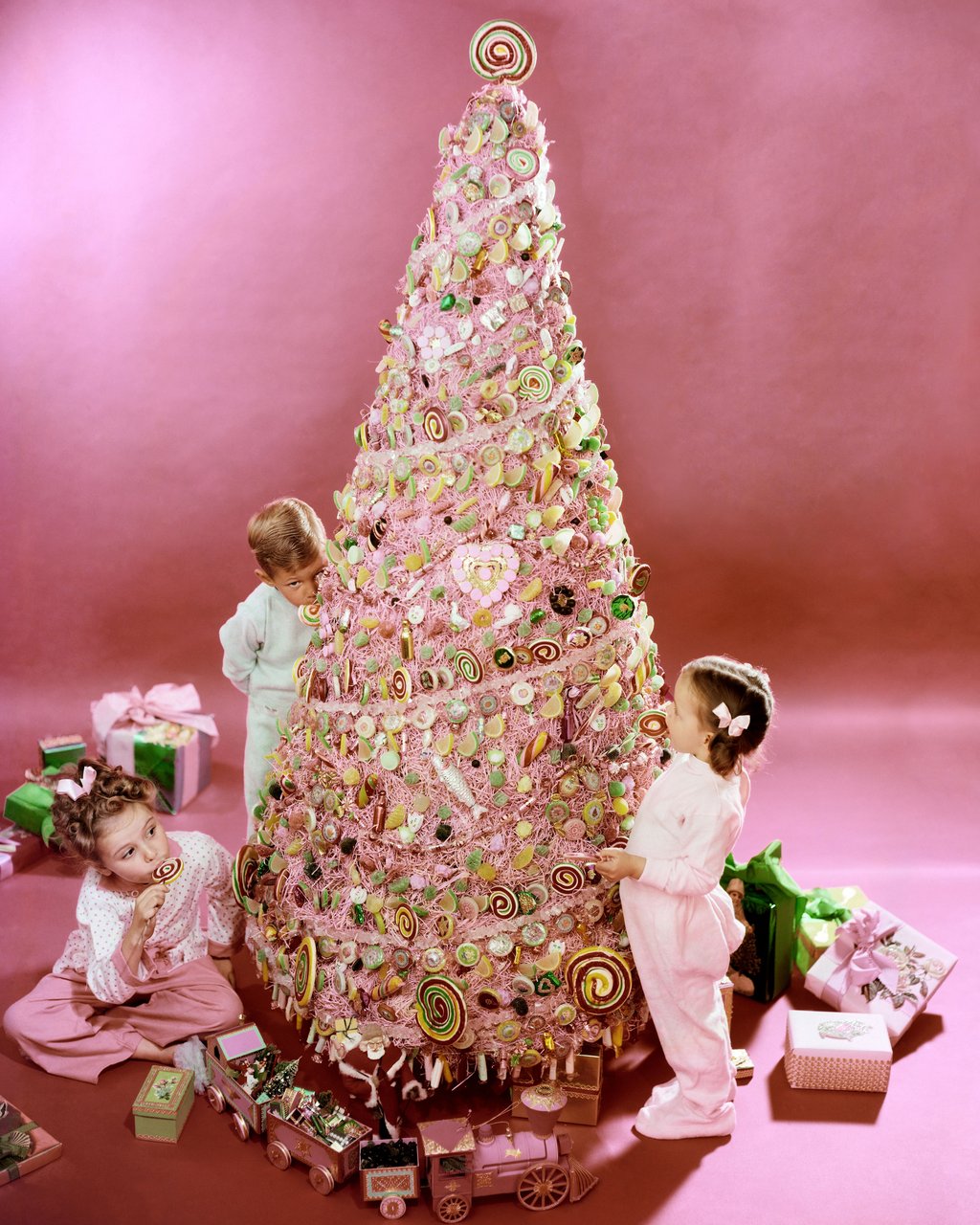 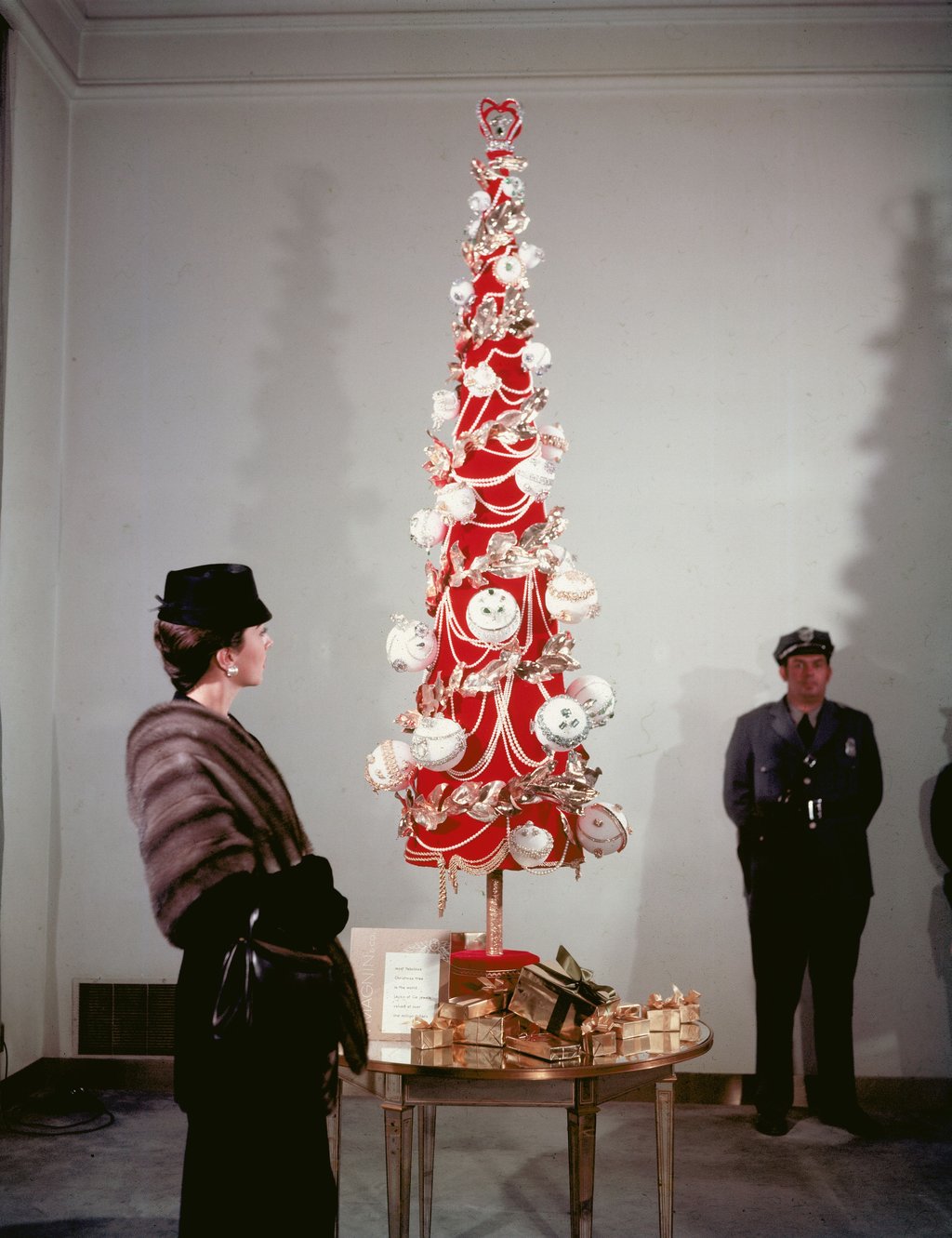 Artificial trees also became more popular as the price to make them decreased, meaning that trees could 1) get bigger and 2) come in colors not found in nature. In the 1950s, this mostly meant that you could get a white tree that looked like it was covered in snow, but real envelope-pushers could find red ones, pink ones, and more.

While natural trees started to make a comeback in the 1970s, tree decor only got louder. Department 56, known for its Christmas village collectibles, was founded in 1976, bringing more intricate ornaments to homes within driving distance of a department store. 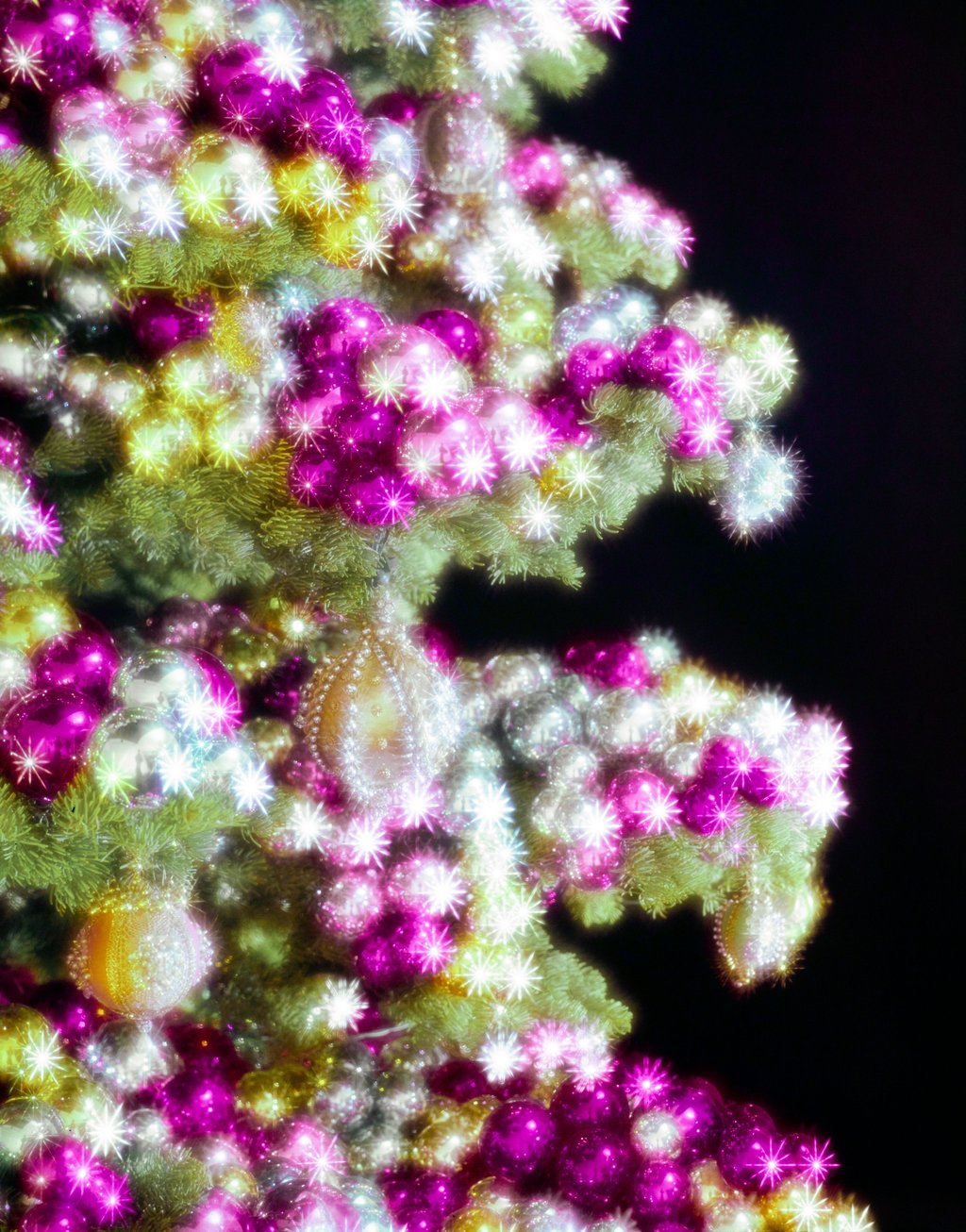 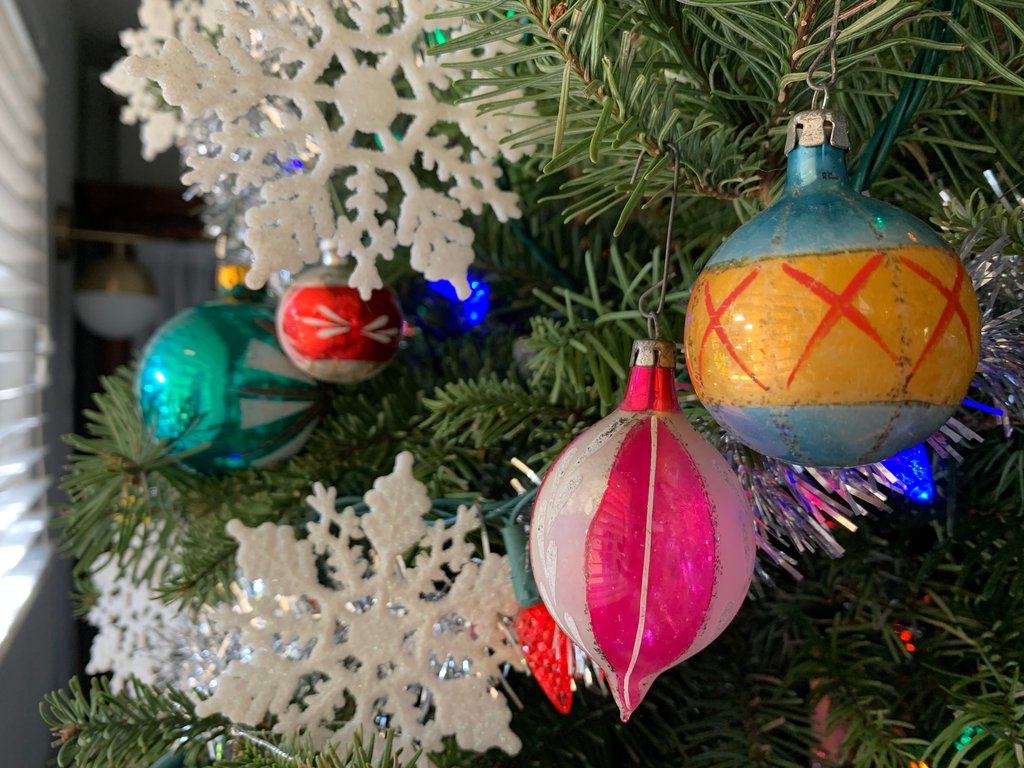 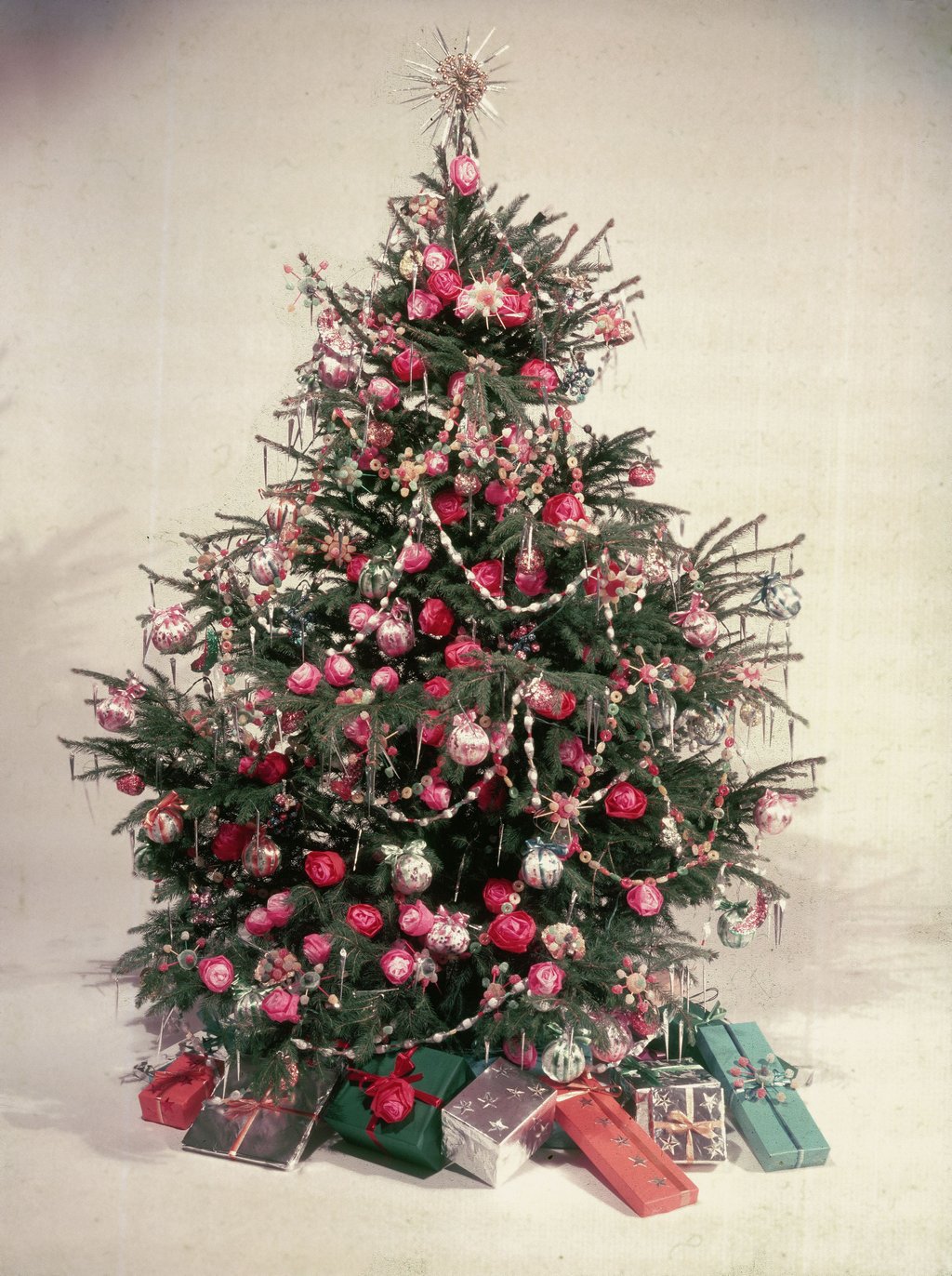 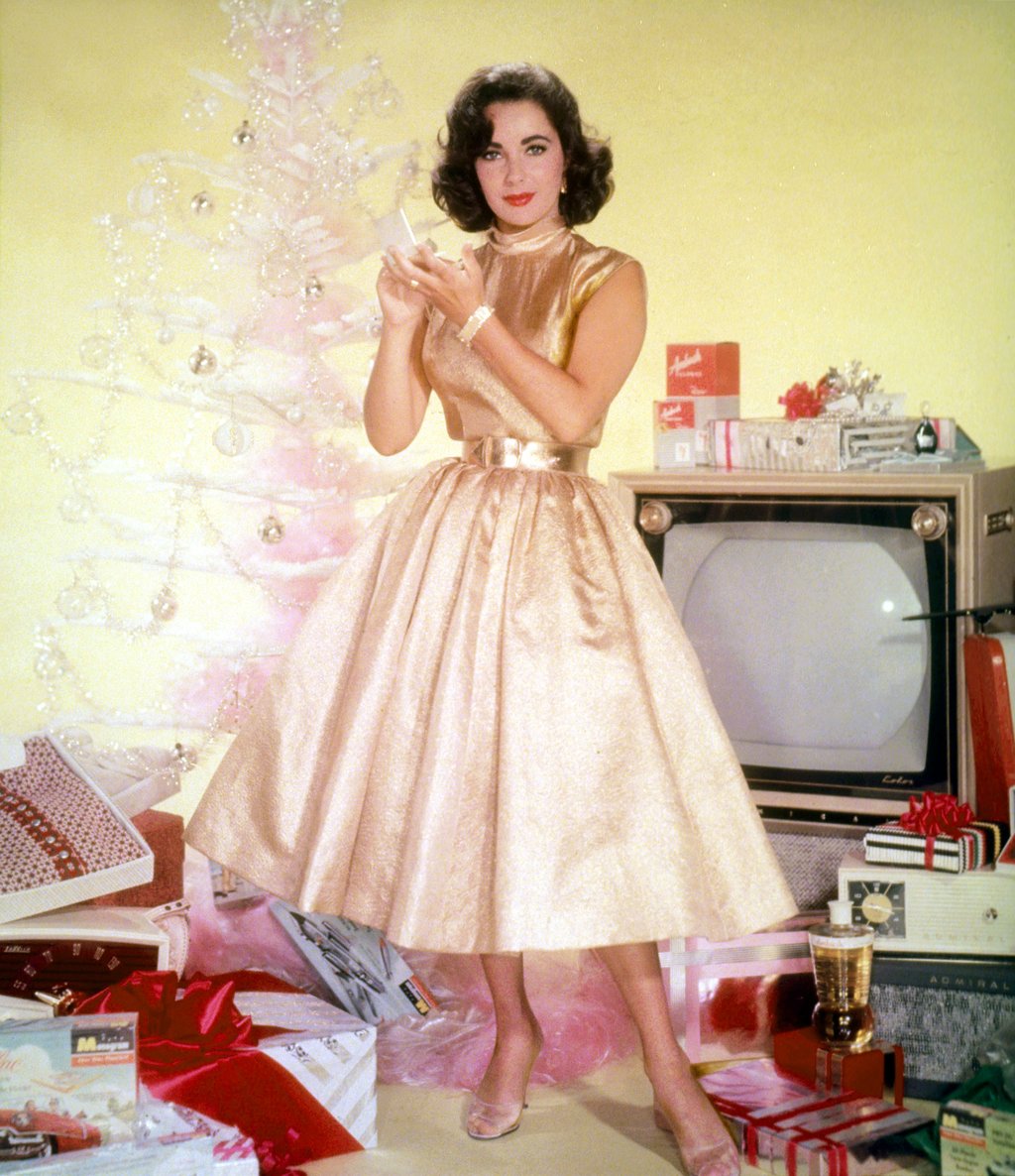 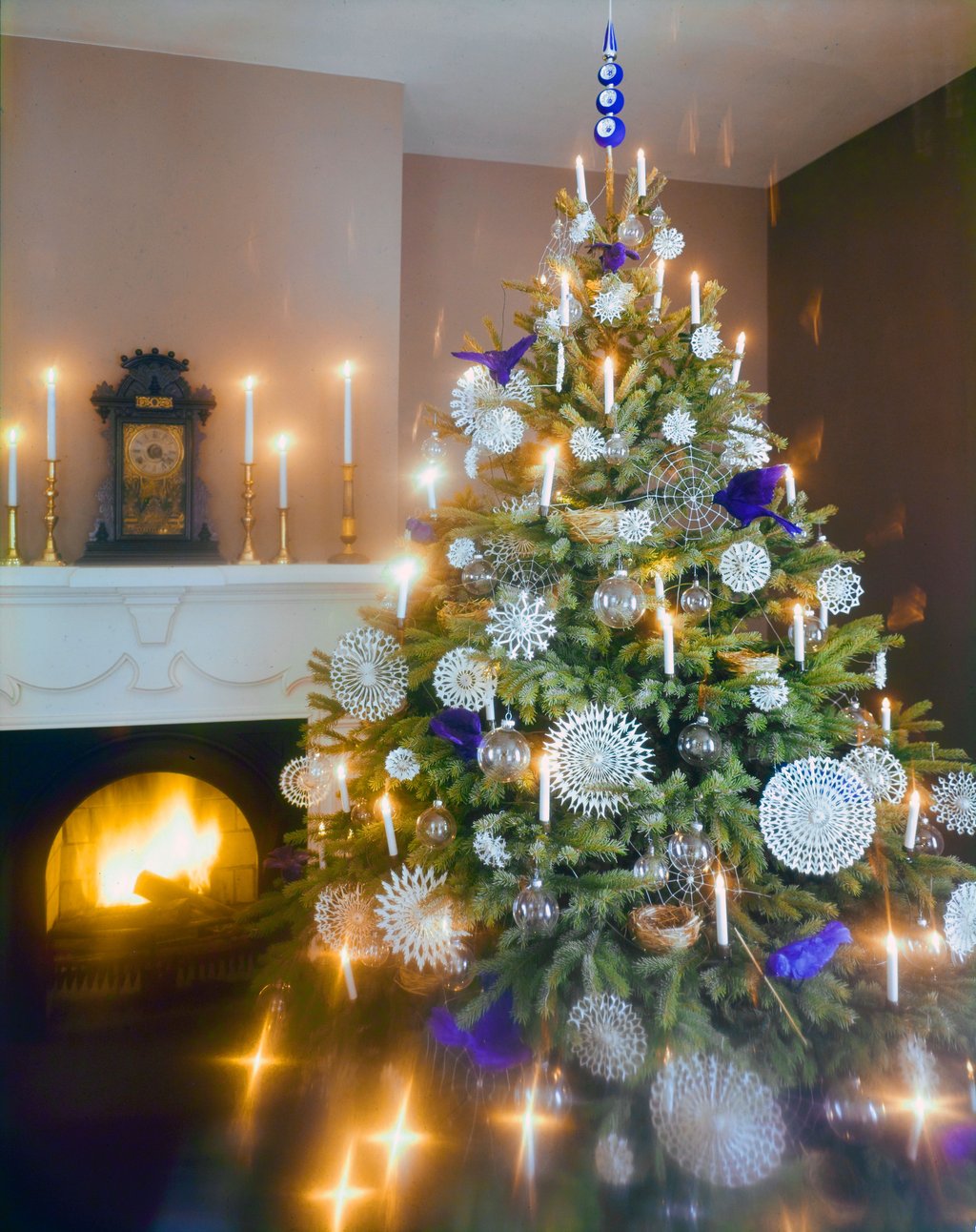 Hallmark, previously known for its greeting cards, got in the ornament game in 1973 with its Keepsake line. The line included one-off ornaments that were available only for one season, as well as a series that would have new ornaments added each year, encouraging collectors to load up their trees with full sets dedicated to things like the Twelve Days of Christmas.

Building on the success of Hallmark and Department 54, other companies started producing their own far more luxurious ornaments. 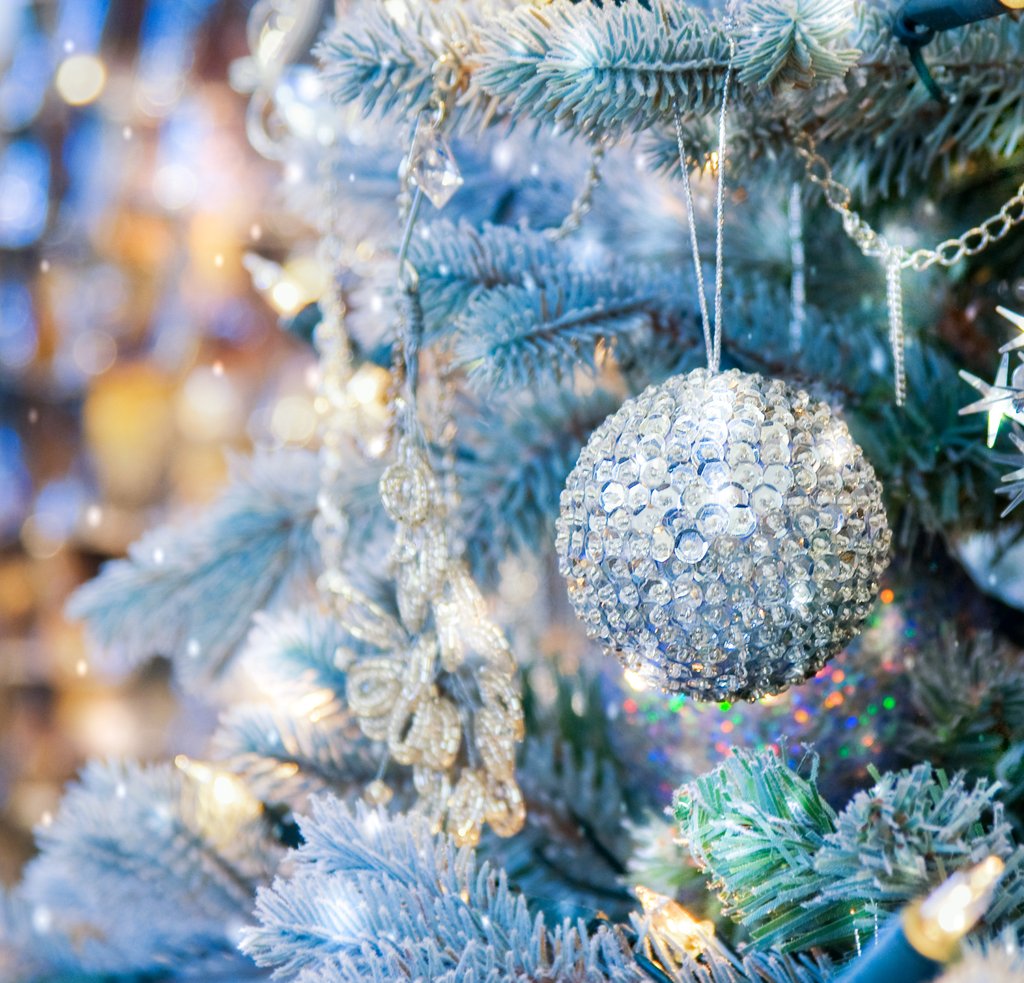 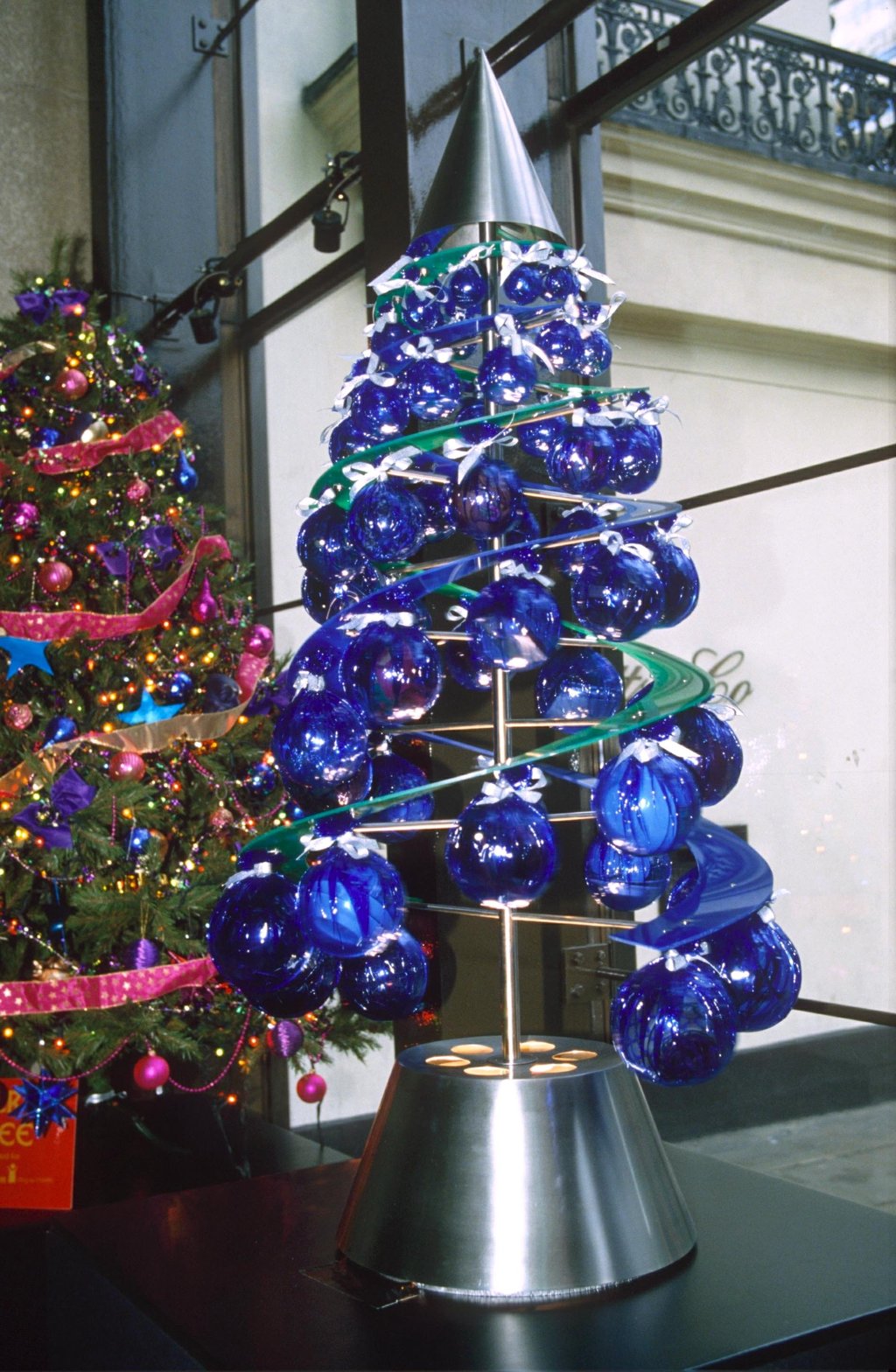 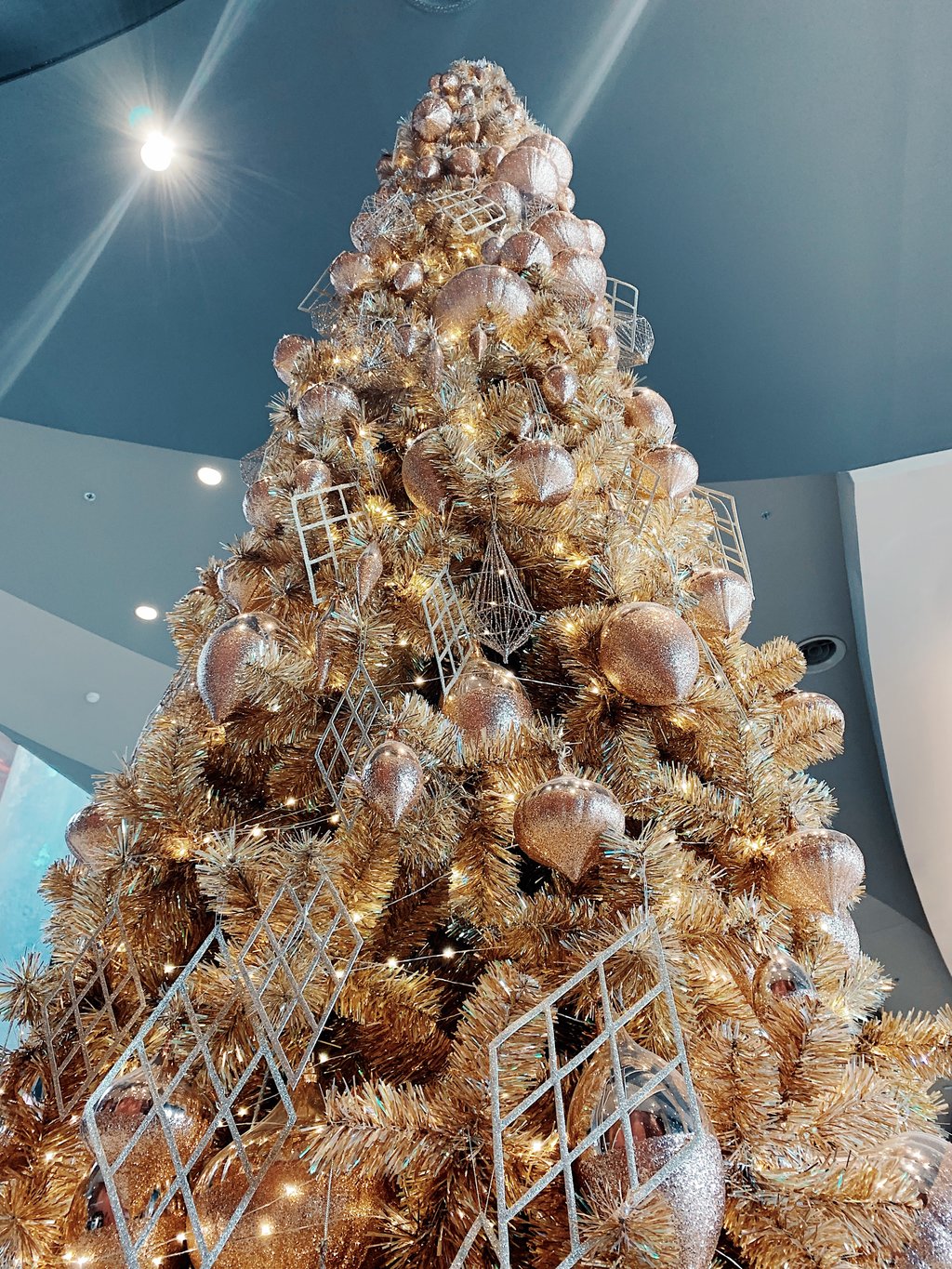 And, of course, the ’80s brought the bling with glitter, sparkles, and hand-blown glass ornaments. Images via MorphoBio, Nils Jorgensen/Shutterstock, and Rainbow Bkk.

Christopher Radko, a Polish American artist, started his empire in the mid-’80s, marketing hand-blown glass creations to Christmas lovers willing to spend upwards of $40 or $50 on a single ornament. The popularity of his work led to plenty of cheaper imitations, but whether real or fake, the Radko look was the fanciest tree trend yet.

The ornaments were always huge, and often frosty in texture and sprinkled with glitter. If you wanted your tree to say, “Elton John could have decorated this,” then Radko ornaments were the way to go.

After the rise of super-luxurious ornaments, the only thing left to innovate was the number of trees one person could have in their home. With various companies and individual Etsy sellers producing any type of ornament you could imagine, it’s now possible to decorate a tree to match your interests. 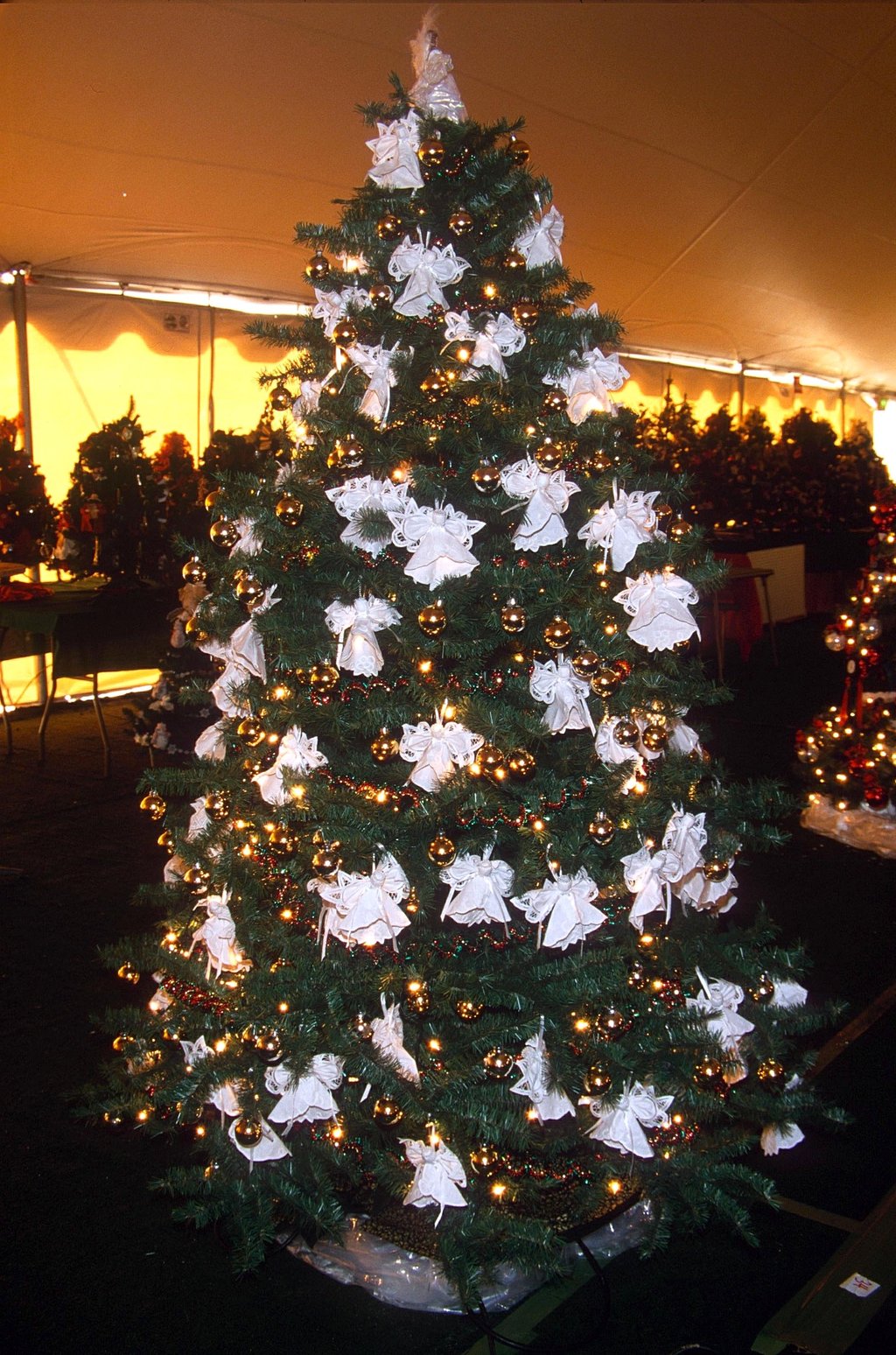 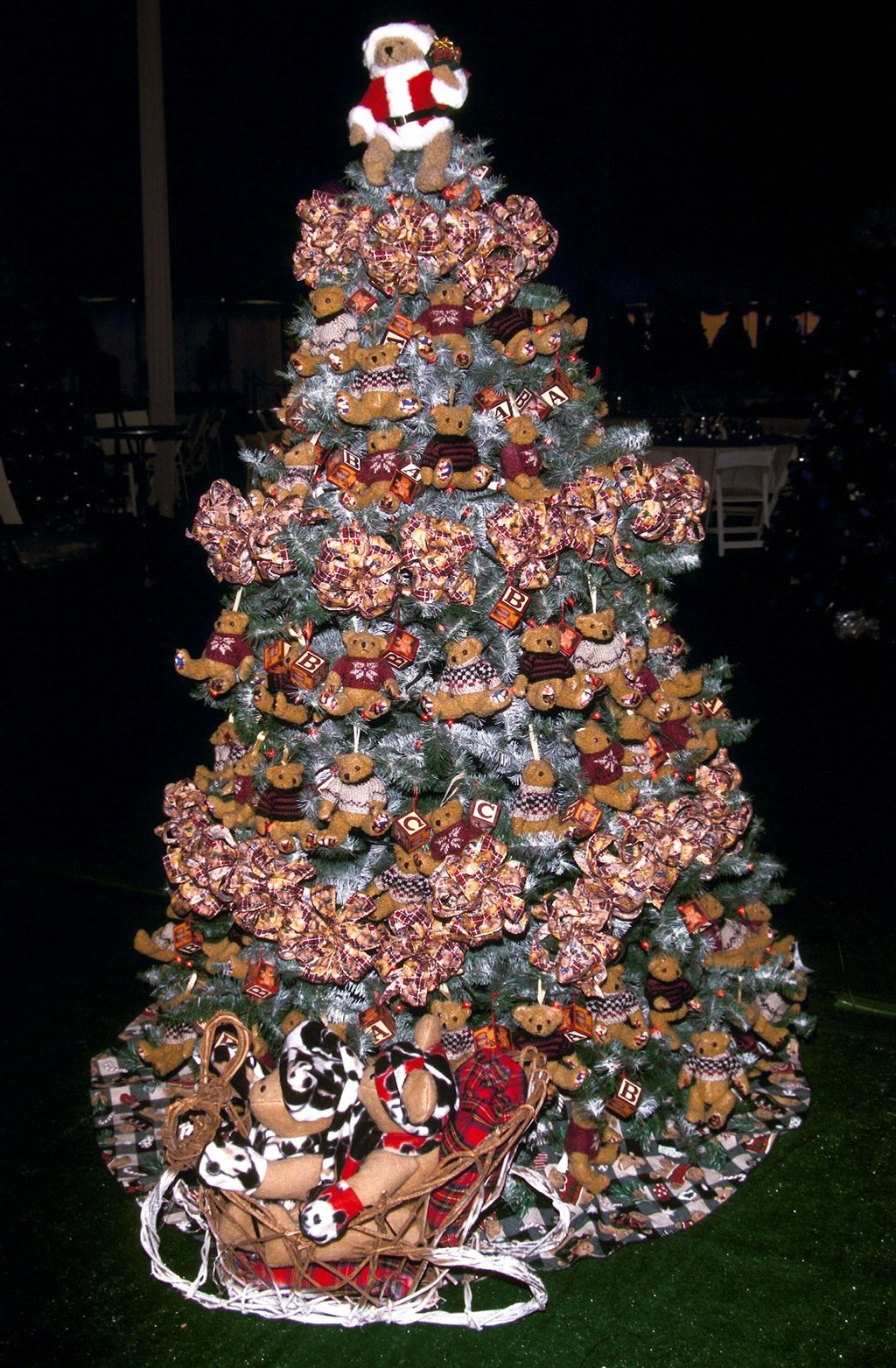 This could be a color, of course, but truly committed decorators do Disney trees, Star Wars trees, Harry Potter trees, or White House trees, sometimes all in the same home. Why mix your Star Trek ornaments with your Santa Claus collection when you could give each group their own tree?

After the over-the-top themes of the 1990s and 2010s, contemporary Christmas trees have returned to a somewhat simpler time—a highly curated, artisanal time, but a more minimalist one nonetheless. 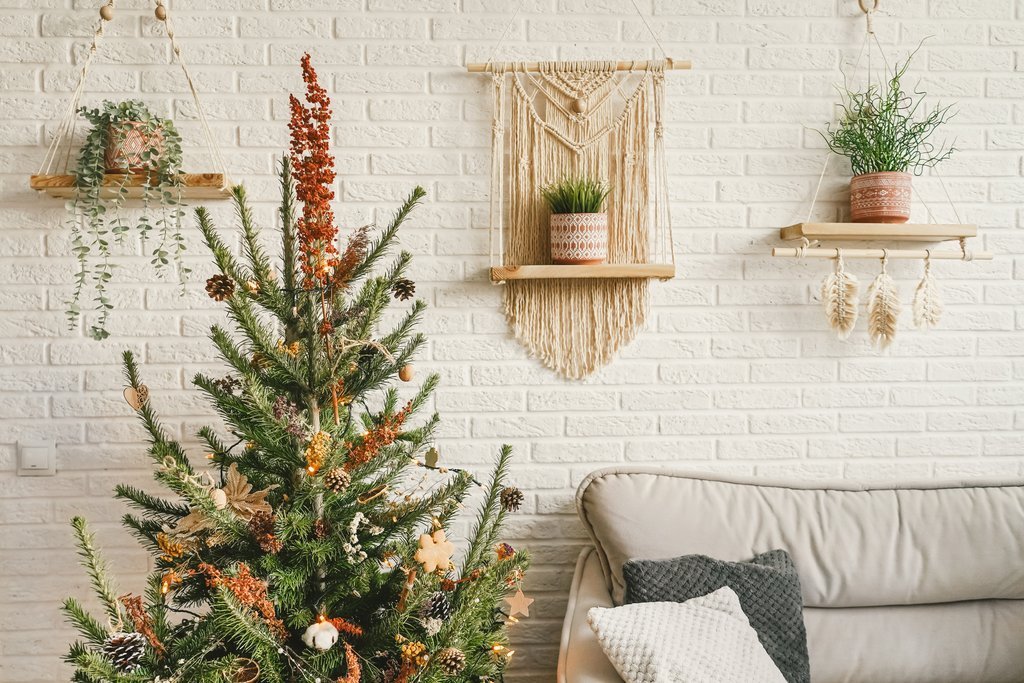 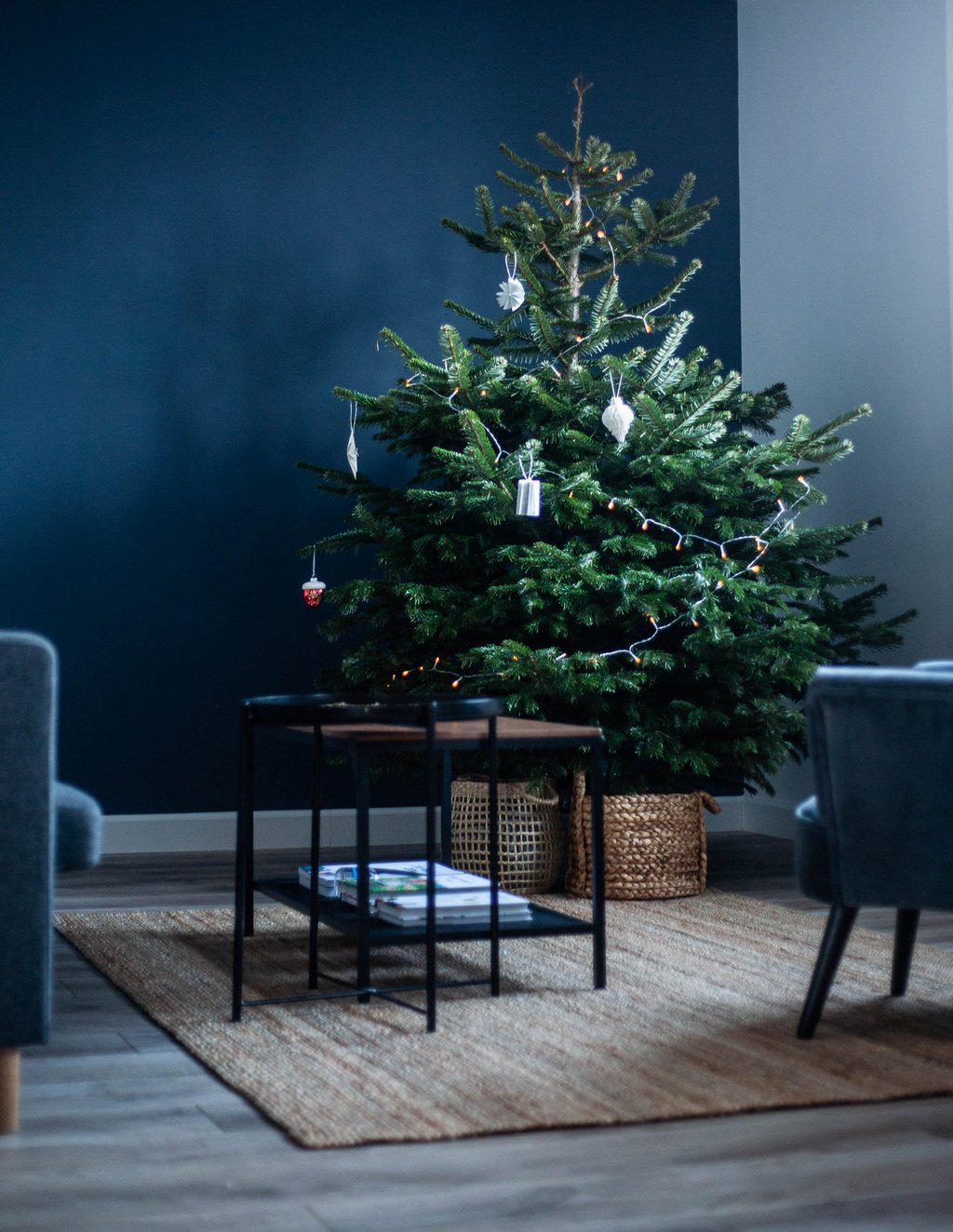 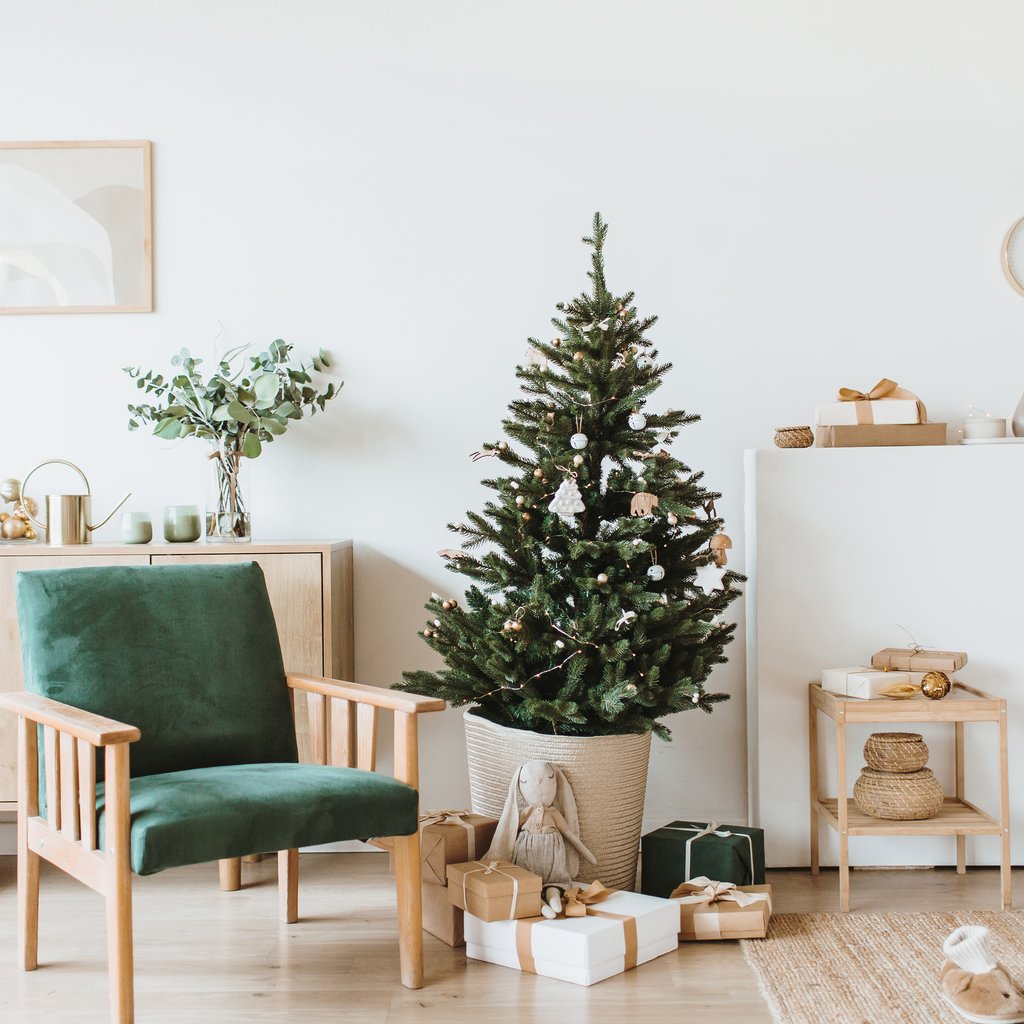 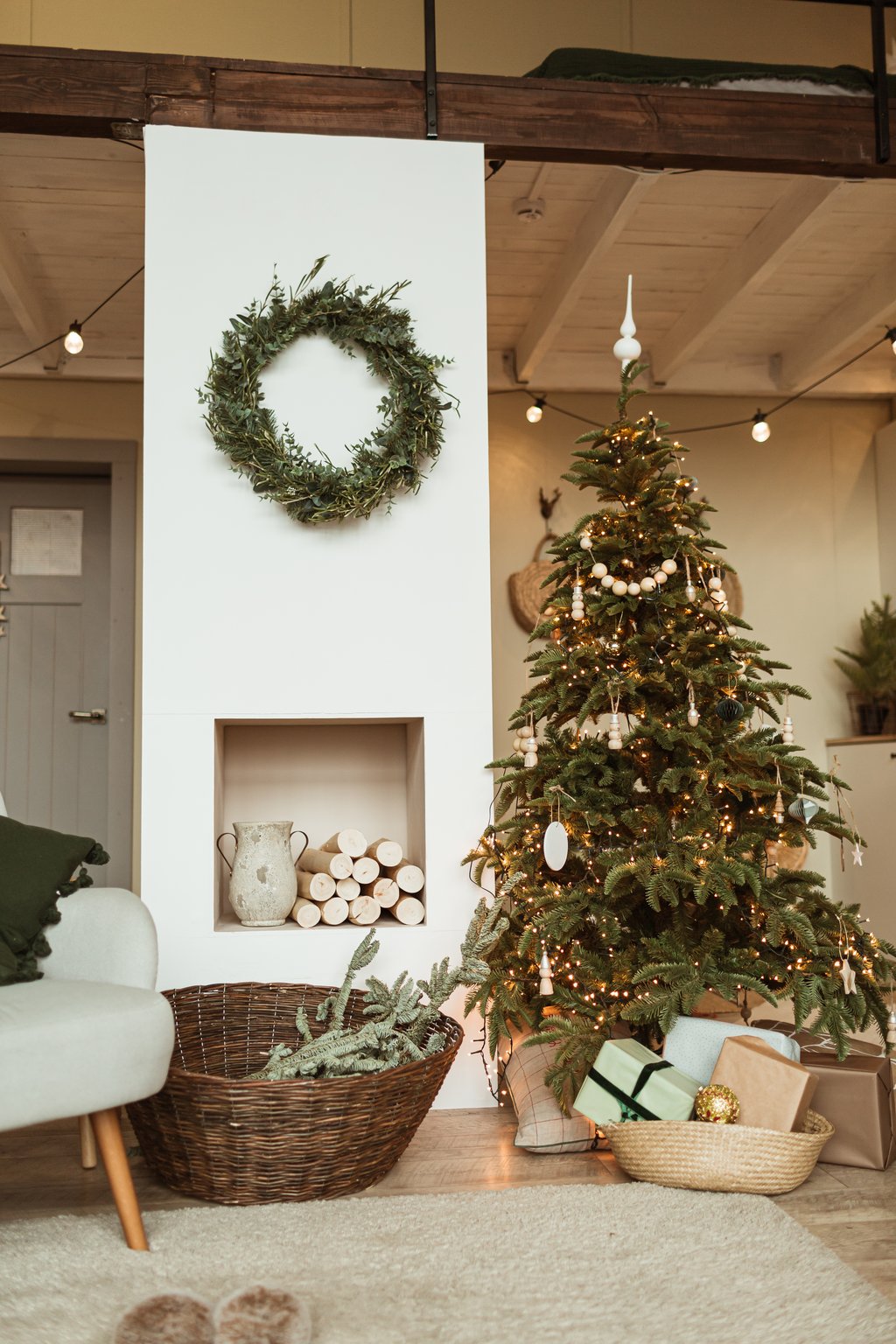 With the recent rise of the Danish concept of hygge, or contented coziness, Christmas decor trends have reflected a more handcrafted sensibility, with less glitter and more reclaimed wood.

At the same time, however, Christmas light displays have gotten ever more eye-popping and disco-esque. So, don’t expect fancy trees to vanish forever—another Christopher Radko could change the game at any time.

The post A Brief History of Christmas Tree Design appeared first on The Shutterstock Blog.

Did you miss our previous article…
https://www.louisdallaraphotoblog.com/?p=1841