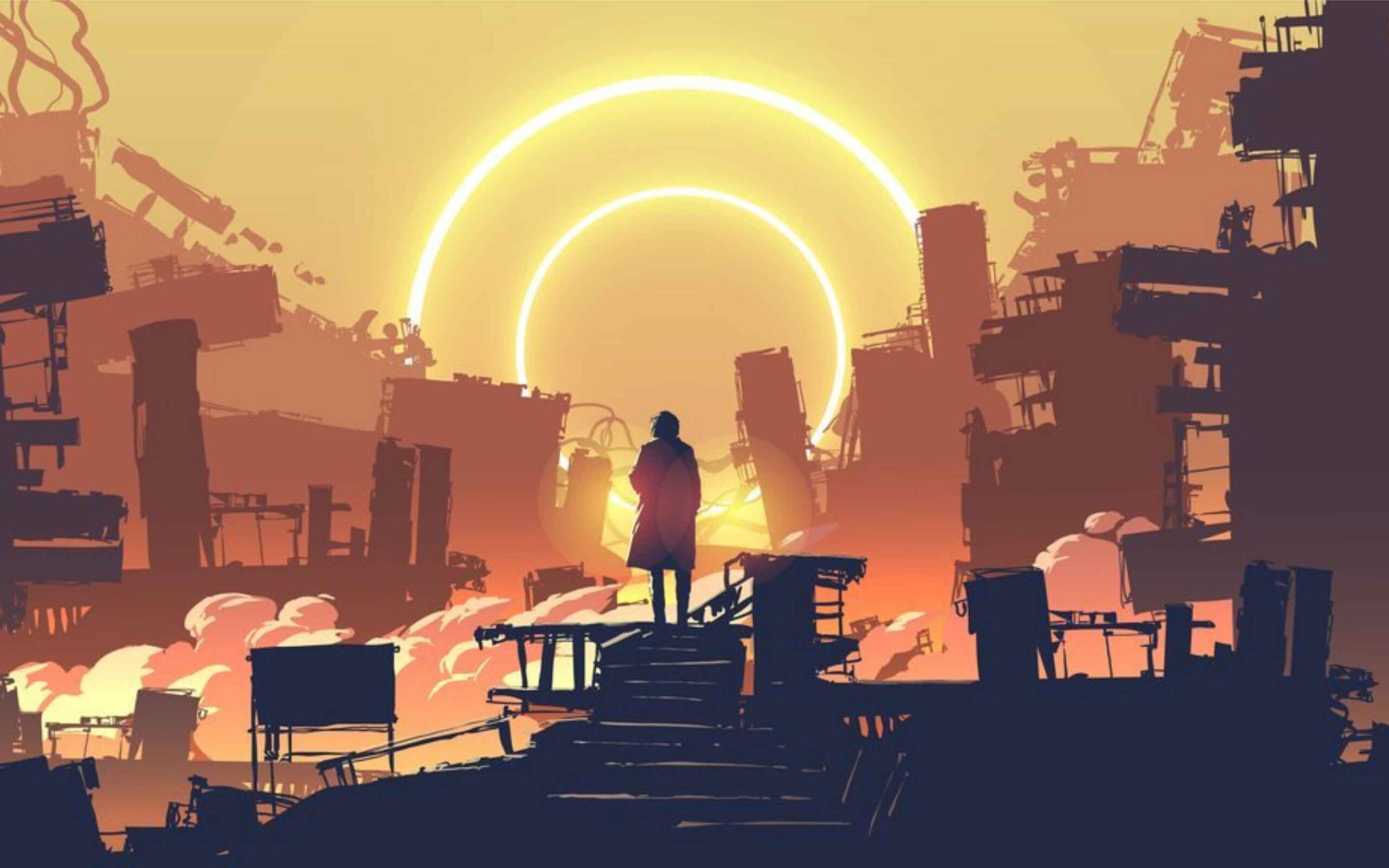 Hacker culture, dystopian landscapes, and Squid Game-inspired surrealism are having a huge impact on creativity.

With Squid Game being Netflix’s most-streamed show ever released and a host of game-inspired projects coming to our screens in 2022, it’s clear that gaming has captured the imagination of the public and crossed into the mainstream.

Here, we analyze what that shift means for designers across different fields—illustration, interior design, etc.—and how brands can channel a game-inspired mood into their projects. 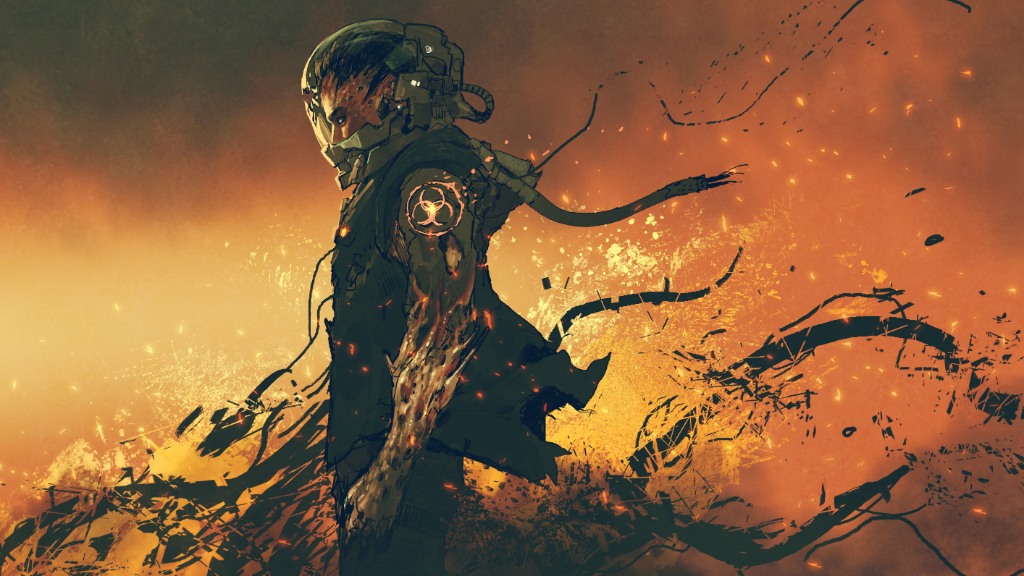 Why Is Gaming a Major Design Trend Right Now?

Games are offering better graphics, narratives, and social online experiences than ever, and more people are discovering the immersive draw of gaming as a result.

Plus, thanks to more diverse and intelligent writing within the industry, audiences that may have once felt excluded from gaming culture are now finding games that not only appeal to them, but are created with them in mind.

In 2021, women accounted for 41% of gamers in the United States, with the social emphasis of online gaming and the presence of more complex female characters just two possible factors in this audience growth. 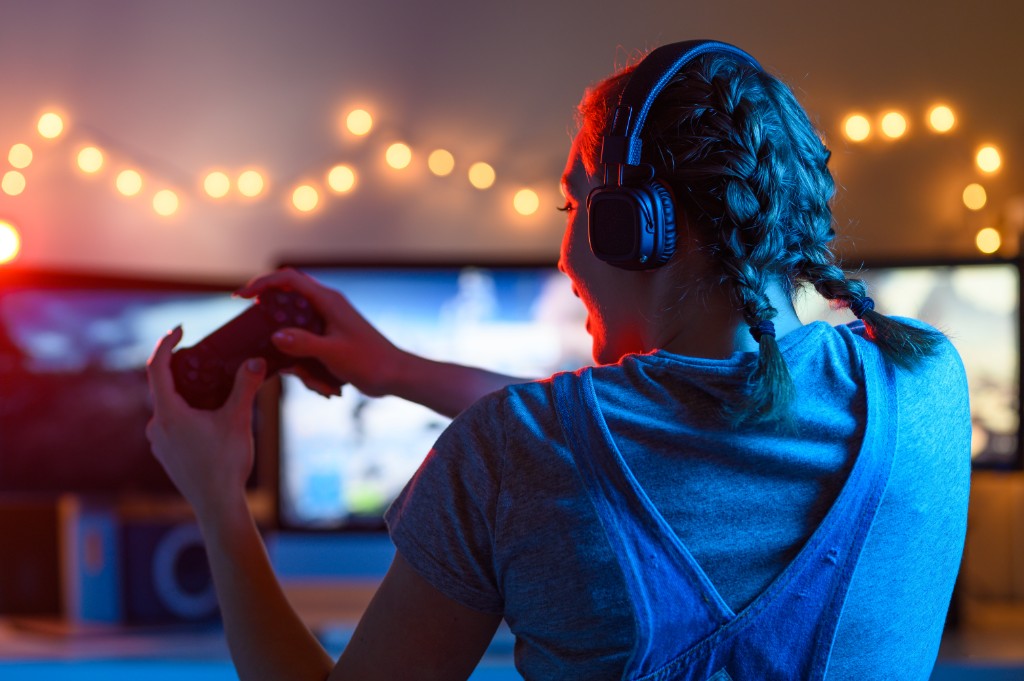 Women account for almost half of the gaming population in the U.S. Image via Anton7.

The surge in interest in gaming is apparent in other areas of popular culture, including fashion and film. The biggest TV hit of 2021, Squid Game, blends a Black Mirror-esque dystopia with the competitive (and brutal) structure of game playing. Later this year, The Matrix Resurrections will bring a reimagining of ’90s gaming culture to screens.

Already, influencers like Bella Hadid are seen on the runways and streets wearing ensembles that wouldn’t look out of place in a cyberpunk game. 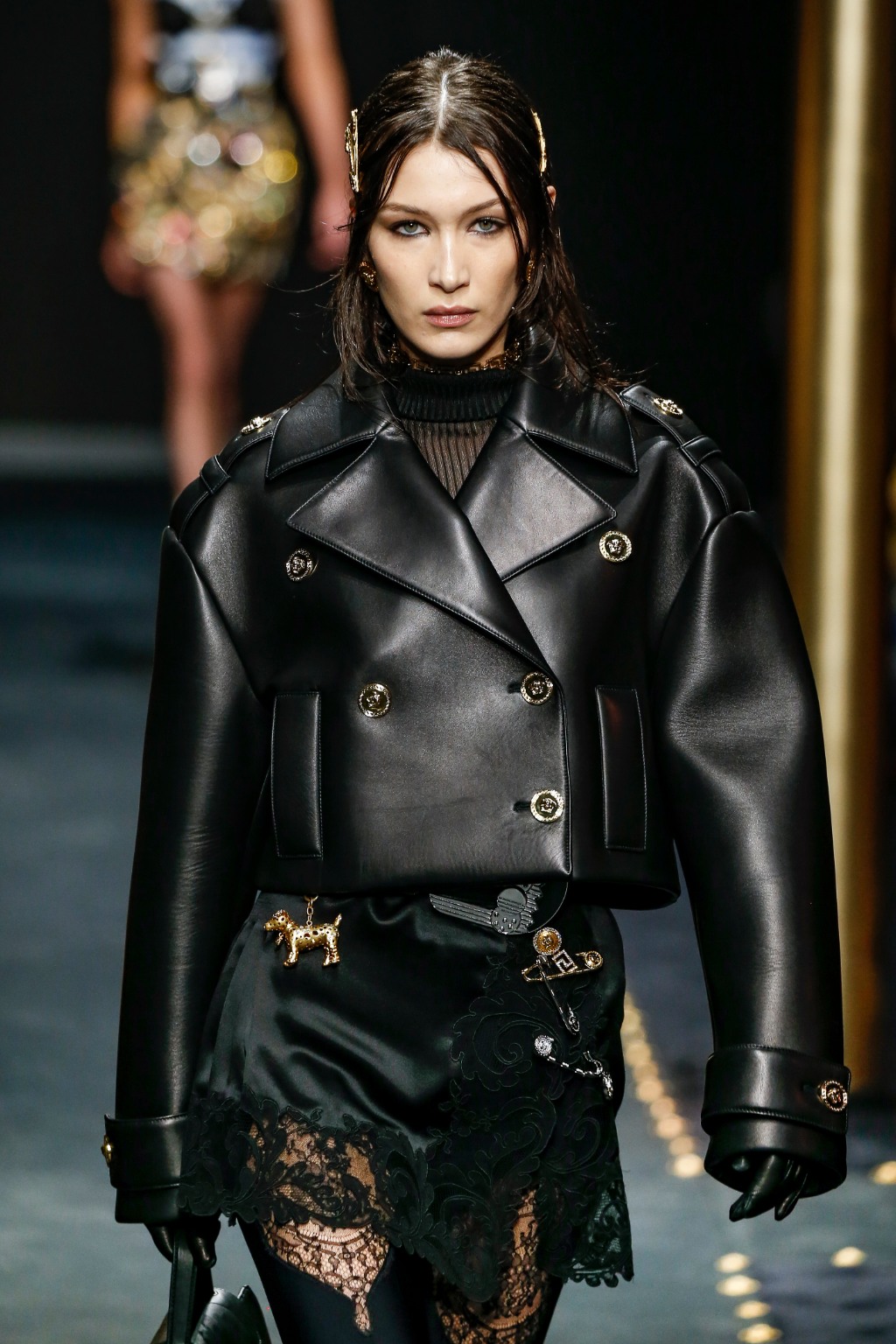 Gaming culture is also having an influence on fashion. Image via FashionStock.com.

Here, we break down the different facets of the gaming trend, and look towards 2022 to see how it’s likely to develop in the year ahead.

The core aspects of the gaming design trend to know now, and to channel into your projects are:

We’ll also look at how the gaming trend is playing out in interior design, products, and fashion.

While hackers might not have the most positive reputation, there’s something undeniably alluring about the anti-establishment hacker culture created by the Wachowskis for The Matrix movie series.

Plus, the astronomic growth of the cyber-security industry has raised the profile of hacking globally. Hackers are no longer confined to their parent’s bedrooms—these are exceptionally skilled people helping to shape the world we live in. 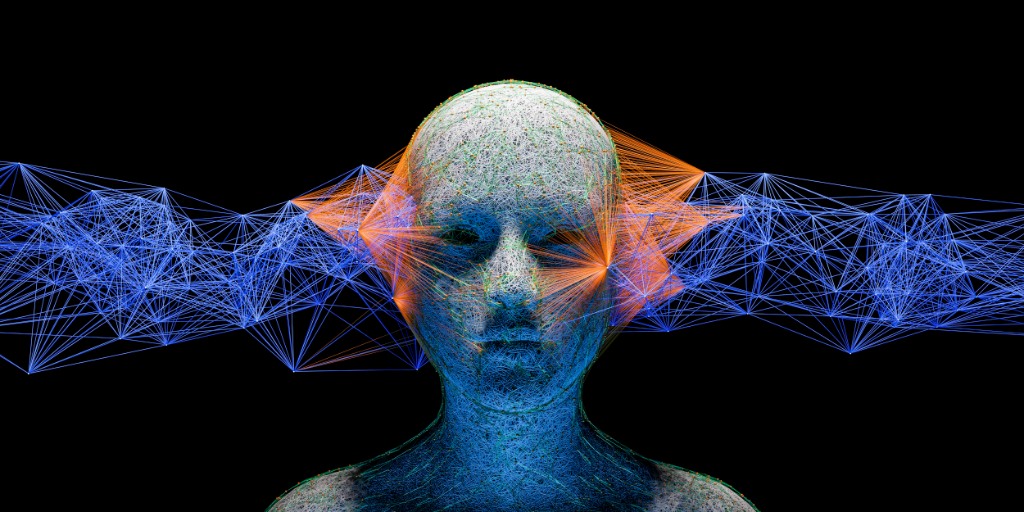 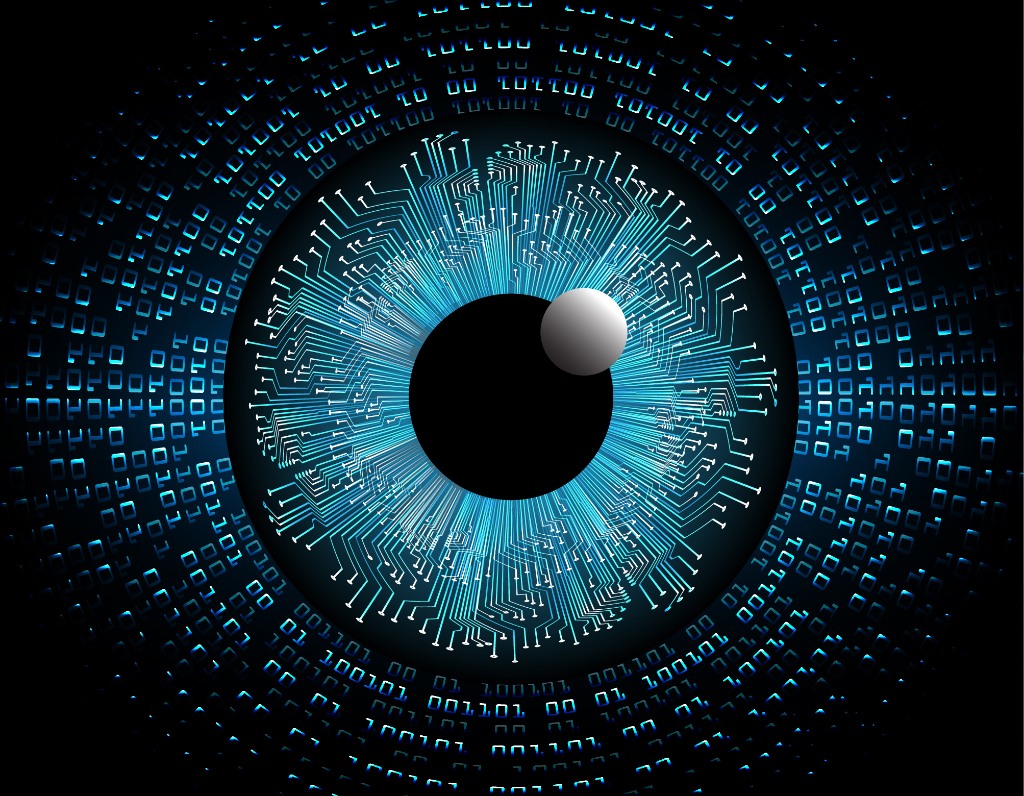 Even the hacker community is represented. Image via Titima Ongkantong.

Case in point: The CIA’s recent rebrand, which is intended to draw a more diverse pool of applicants, uses a hacker aesthetic in its design. Although the logo redesign has been controversial, the branding typifies some of the core aspects of the hacker design trend—fractal lines, AI-inspired figures, and moody black backgrounds. 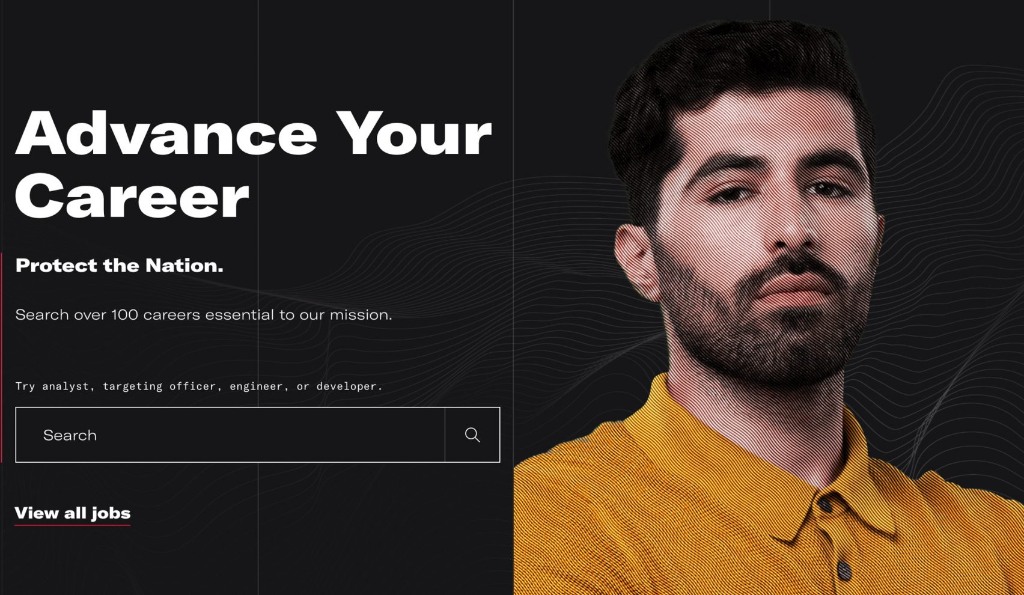 Hacker-inspired design styles have been used throughout the CIA’s new brand identity. Image via Cia.gov.

The aesthetic of The Matrix remains a key influence for hacker design, with the new The Matrix Resurrections movie likely to reignite an interest in neon green and cyberpunk style. 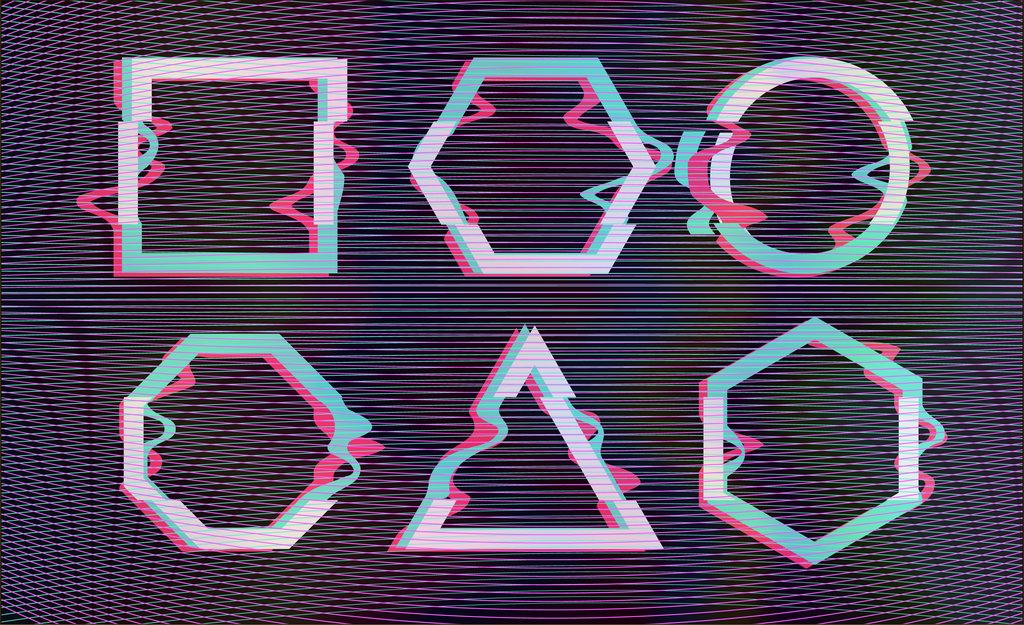 Neons and glitch effects play a major role in this emerging trend. Image via local_doctor.

Korean culture has been brought to Western screens with films such as Parasite (which won Best Picture at the 2020 Academy Awards), Train to Busan, and Snowpiercer—and of course, through K-Pop.

But, the sign that South Korean culture had firmly crossed into American consciousness was the runaway success of dystopian TV series Squid Game.

While the game-inspired narrative has captivated the Netflix audience, it’s the surrealist sets that have captured designers’ imaginations.

Global Trend Report: The Rise of “Newtro” in South Korea

Inspired by MC Escher drawings and children’s playgrounds, the pastel-saturated interiors in which the contestants play deadly games are used to evoke childlike nostalgia, making the violent consequences feel even more surreal and off-kilter. 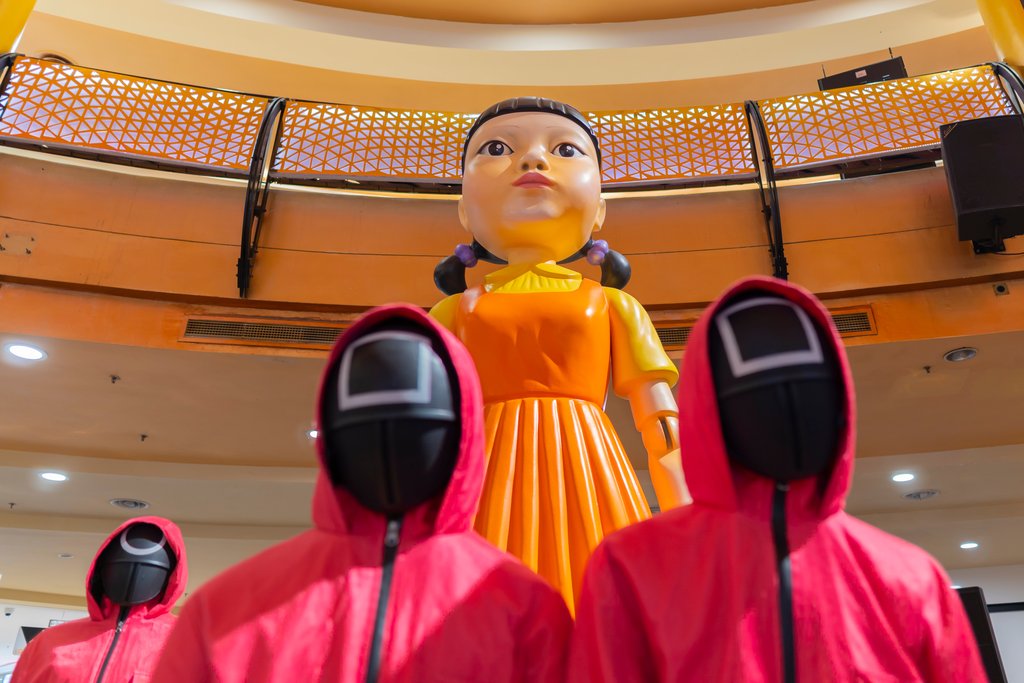 The highly-surrealistic vibe of Squid Game. Image via Faiz Zaki.

While ultra-bright palettes, giant dolls, and playground sets are used to characterize the game spaces, the contestants sleep in a sparsely-furnished warehouse with ladder bunk-beds, tiled walls, and a prison-like palette of white, black, and teal. 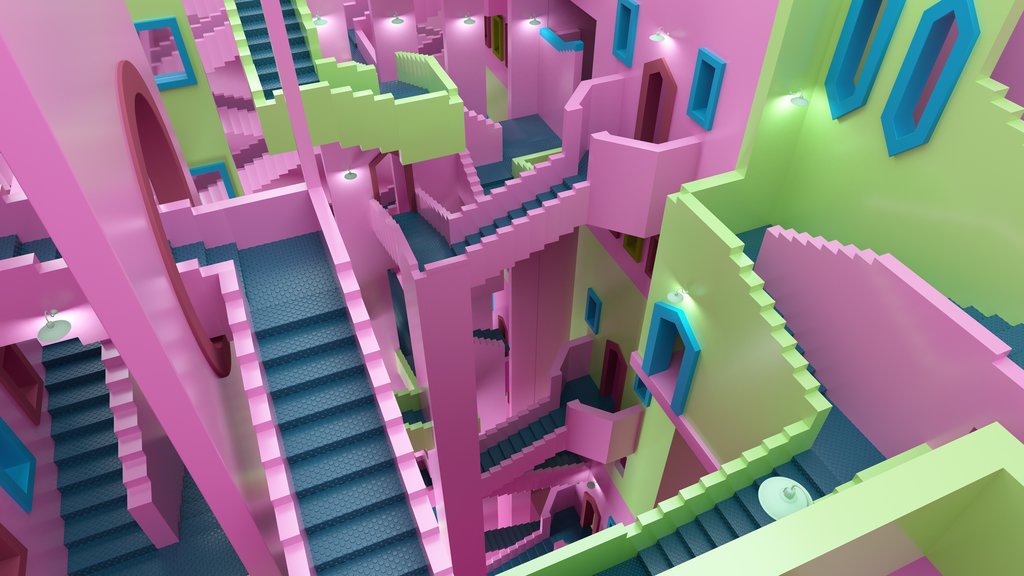 The surrealist-inspired set designs of Squid Game were created to trigger a sense of childlike nostalgia. Image via mkfilm.

In 2022, we can expect to see a Korean interpretation of gaming aesthetics move across from cinema and the small-screen to interior design, products, and graphics.

Experimental pastel color palettes, references to childlike nostalgia, and an emphasis on cute and cartoonish design are easy ways to tap into the trend.

While online gaming has boosted the appeal of multi-player games, with FortnitePokemon Go, and Call of Duty being forerunners in the online games market, there’s a distinctive branch of gaming that’s much more individualist and immersive.

With incredible graphics and world-building being a huge draw in top-selling games like Red Dead Redemption, The Legend of Zelda: Breath of the Wild, and Cyberpunk 2077, players are finding that style and emotive narratives are becoming more important than simple shoot ‘em ups. 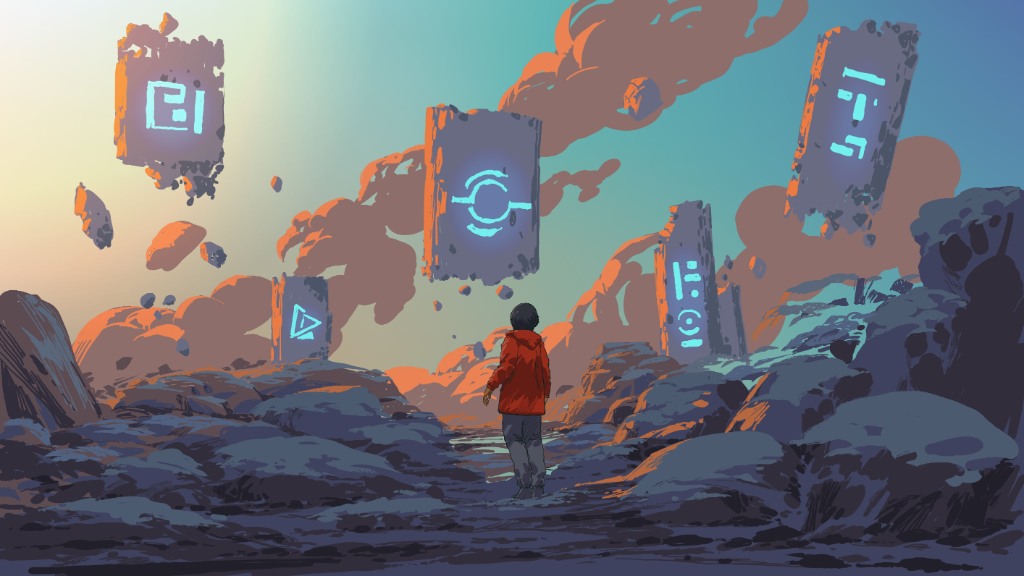 With style, narratives follow in suit. Image via Tithi Luadthong.

A dystopian aesthetic has emerged through games like The Last of Us and Death Stranding, which emphasize a moody solitude, epic environments, and Mad Max-inspired themes that seem weirdly attuned to a world afflicted by a global pandemic.

This dystopian aesthetic celebrates imperfection and decay, and is in contrast to the cartoonish, brighter worlds fostered by Squid Game and Fortnite.

In your designs, you can channel a dystopian aesthetic with grunge textures, noisy overlays, dark, and sombre color palettes, and a secluded mood. This is a particularly atmospheric aspect of the gaming design trend which translates best to ethereal illustration or photography. 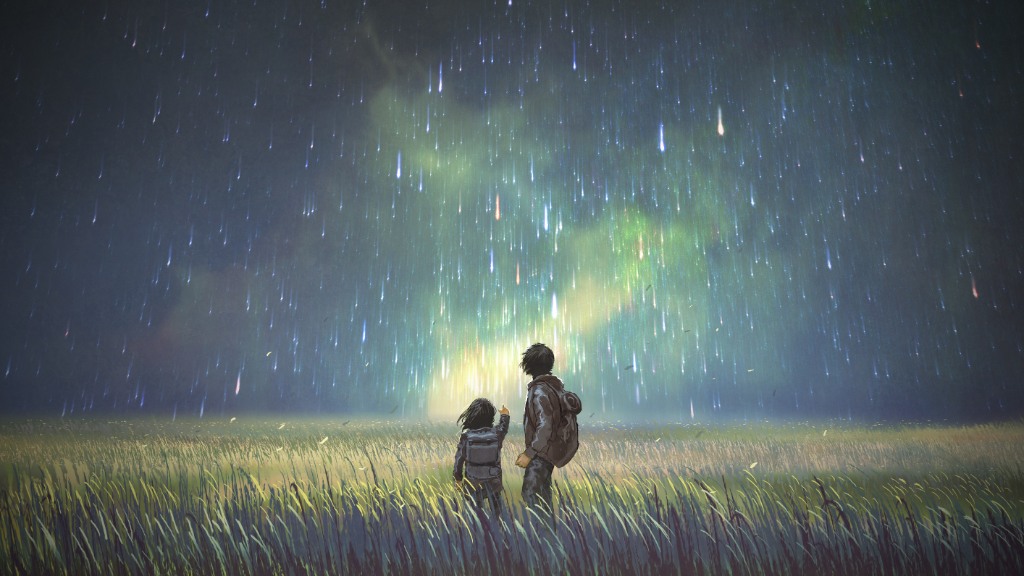 The dystopian aesthetic is having its day, so capitalize on it. Image via Tithi Luadthong.

The golden age of geek continues with gaming having broken into the mainstream, but the true sign that gaming has become officially cool is how its aesthetics have broken into the fashion world.

In 2016, LV cast video game characters from Final Fantasyin its editorials, putting out the first high-fashion campaign ever to use digital rather than real-life models.

Louis Vuitton is not the only brand discovering the appeal of gaming for fashion consumers. If you happen to have a cool (and whopping) $10,000 to spare, you can purchase a limited edition Gucci-branded Xbox Series X. 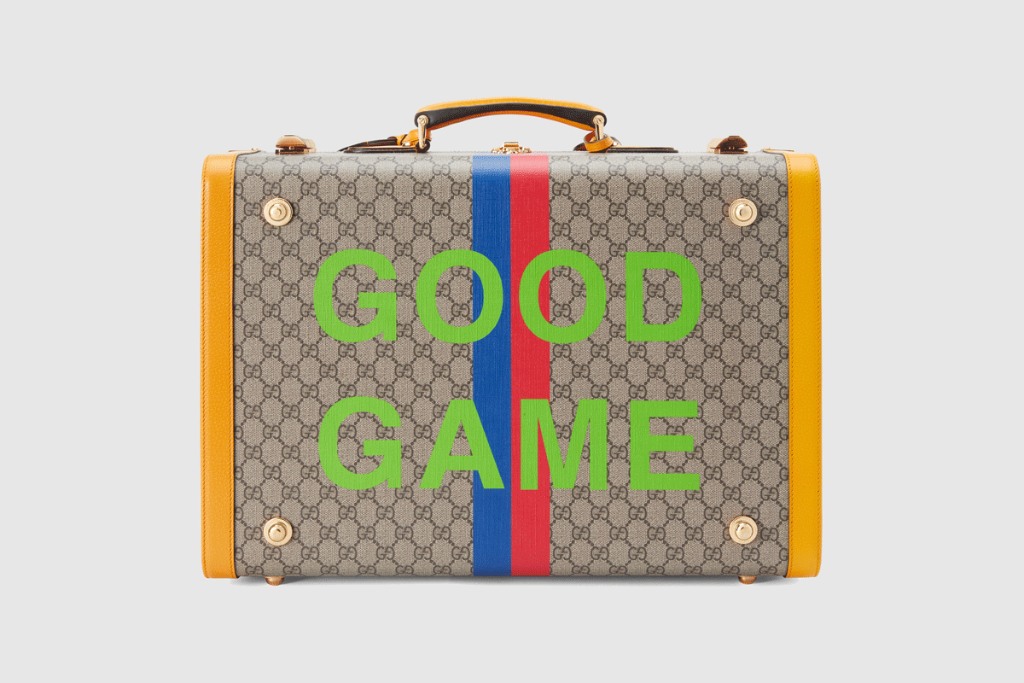 A Gucci-branded Xbox Series X is the ultra-luxury accessory to complete any fashionable gamer’s wardrobe. Image via StockX.

Once-wary fashion brands are finding that gaming collaborations and influences are both popular and profitable.

The stereotype of the reclusive gamer playing shoot-’em ups in their parents’ basement is also being overturned by a much more glamorous interpretation of what gaming can look like in interior design.

The new wave of female gamers has resulted in game-related products and interior styles, which feel much more appealing and considered.

Whether its minimalist game stations or games rooms designed with fun game-chic style in mind, there are now more ways to create your perfectly-stylish gaming space.

With the gaming industry only set to grow further in 2022, we expect that gaming products and accessories will become more centric to interior schemes, alongside home movie and sound systems, and be proudly displayed rather than concealed. 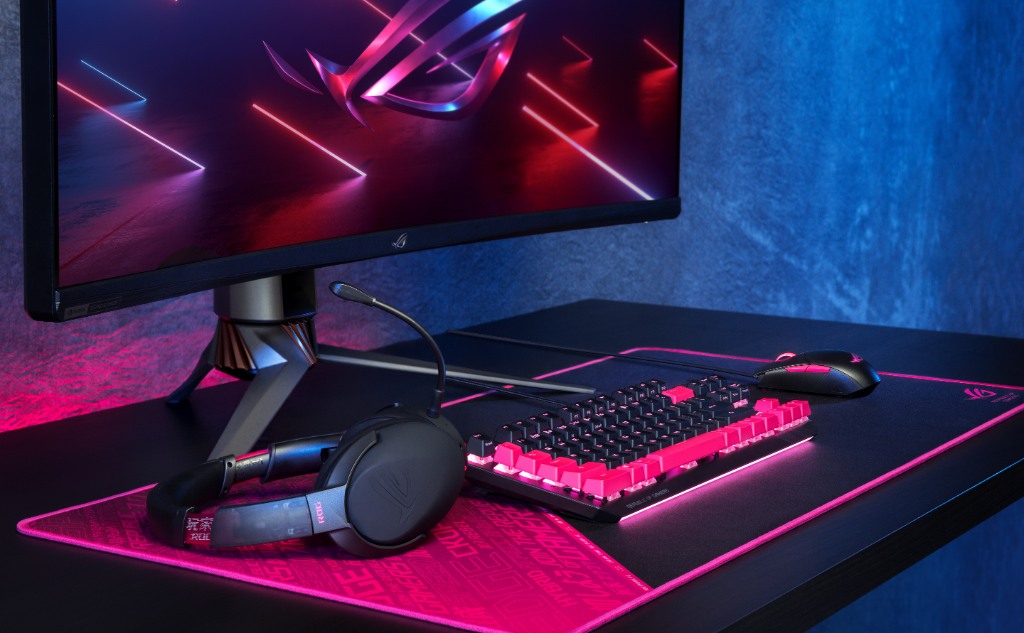 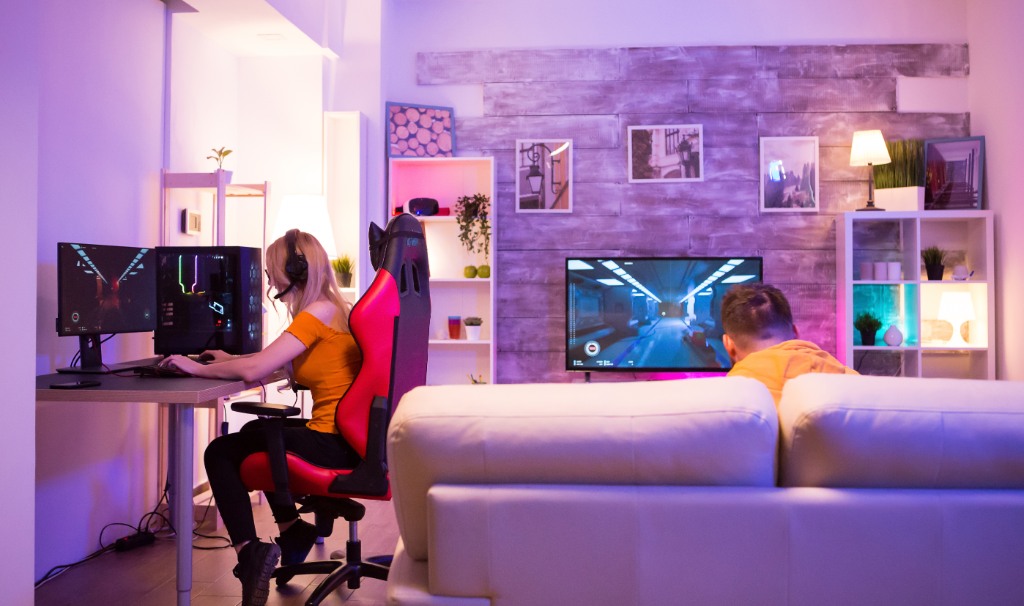 The Future of Gaming in Design

As gaming continues to push into mainstream culture, more commercial brands and design sectors are starting to pay attention to this once-overlooked industry. For designers across a range of media, gaming presents a unique opportunity to explore completely escapist worlds and design styles.

From the influence of Squid Game-inspired surrealism to the dystopian decay of games like The Last of Us, the pool of creative references for designers is extremely broad.

In 2022, channel the gaming look with a glitch effect, neon pastel color palette, or moody grunge overlay. There’s always something fantastical to explore. 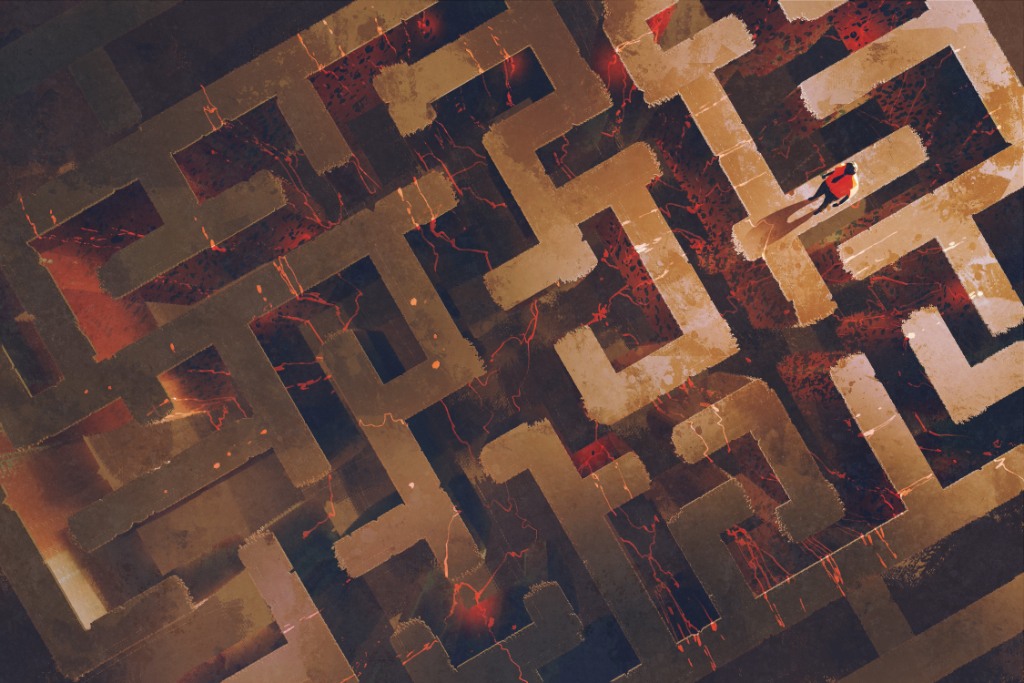 The post Game Aesthetics Have Taken the Design World by Storm appeared first on The Shutterstock Blog.

Did you miss our previous article…
https://www.louisdallaraphotoblog.com/?p=2048